The Falls of Rauros 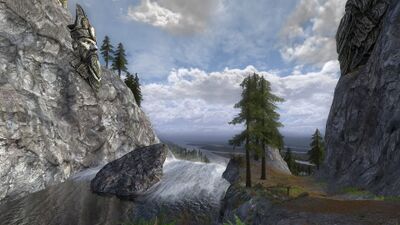 The Falls of Rauros [61.2S, 45.8W] is a landmark within the East Wall in East Rohan. Here the waters of the Anduin gather in Nen Hithoel, before plummeting over the escarpment to the lands below.

Nearby, along the western side of the falls [61.6S, 46.2W], is an unnamed downward sloping passage that ultimately leads to the Mouths of Entwash [34.0S, 37.2W] in the Beacon Hills of Far Anórien. It is possible that this passage is meant to be the North Stair, mentioned by Aragorn while speaking to Boromir, as an ancient Gondorian portage past the falls. (Tolkien always refers to this as a "stair" specifically, yet Aragorn, Gimli and Legolas travel a down-sloping ravine "like a steep stair" to reach Rohan. Thus leaving the exact nature of the North Stair questionable; a second pathway in almost the same exact location being unlikely.)

At the breaking of the Fellowship of the Ring, Frodo and Sam paddled a boat from the west bank of the river to the east just above the falls and had to use all their strength to avoid being swept over the falls by the current. Shortly afterwards Boromir's body was placed in another boat by Aragorn, Legolas and Gimli who sent it over the Falls. Aragorn declared in the Lament for Boromir that ever after the Tower of Guard would gaze "to Rauros, golden Rauros falls until the end of days".[1]