The Battle Before the Rammas Deluon 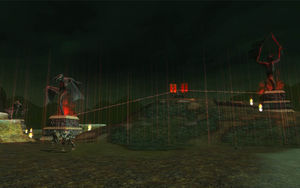 A view of the Watching Stones of Rammas Deluon.

"The might of Angmar rallies to defeat the Trév Gallorg. Reinforcements from Urugarth and Carn Dûm march through the swamp of Malenhad towards Rammas Deluon. It falls to the Champions of Eriador to stop them...."

This instance can be accessed once a server has completed the Battle for Aughaire 20 times. Once this has been accomplished, speak with Faelbenn outside of Gath Forthnír by the Stable-master. He will give you the quest The Battle Before the Rammas Deluon. Talk to him again to enter the instance.

Although the attacks on Aughaire have been stalled, reinforcements are already on the way. The only way to cut them off and mount a counter-attack is at the Rammas Deluon, where the Watching Stones have been fortified by powerful Angmarim Sorceresses. A full fellowship is required, and some form of voice chat helps a lot as well. Everyone will need to pay close attention to what is going on, because a good deal of coordination is required and a single defeat often means restarting the instance from scratch.

Four positions will need to be defended - the Northernmost, North, South and Faelbenn's Bulwarks. The four bulwarks are lined up from north (Northernmost Bulwark) to south (South Bulwark), with Faelbenn's Bulwark between the North and South Bulwarks. Each bulwark is defended by five or more NPC defenders, which includes a Healer who also heals players. If all defending NPCs at one of the Bulwarks or Faelbenn are defeated, the instance will fail and players will be brought back outside Gath Forthnír. When the encounter begins, random waves of mobs quite similar to those in the other two battle instances will spawn every two to three minutes near a Bulwark and assault it. For more details on the waves of mobs, see the section below. Occasionally, a Nemesis-difficulty Warlord of Angmar will spawn instead of a wave. There will be an announcement 15 seconds prior to an assault that states which Bulwark is about to come under attack.

There are five Sorceresses that need to be defeated within 45 minutes in order to succeed. They are called the Sorceresses of Pain, Terror, Cowardice, Doubt, and Despair, and are found from north to south in the order listed. A barrier indicated by glowing red lines deals a considerable amount of damage to anyone who tries to pass it, thus preventing players from attacking a Sorceress until she weakens and a part of the barrier is temporarily lowered. This usually happens either during or just after an assault on a bulwark has been defended, and the Sorceress that weakens will be one of the two closest to that bulwark. After a few minutes, if she is not defeated, the Sorceress will regain her strength, recover any lost morale and replace the barrier.

The fellowship should be split into groups of four and two for offense and defense.

On defense it is your duty to prevent the Enemy from claiming any of the bulwarks. It is important to react as soon as the announcement of an assault on a bulwark appears, since the defenders will not survive for long without your support. The tank should try to keep as many mobs as possible aggro'd (in particular Elite Masters and Elites) while the healer keeps everyone alive (and should keep an eye on the morale of the defenders at all times). Normally you will not encounter more than one wave at a time, but sometimes a second wave will prepare to assault a different bulwark. In this case, determine whether is would be feasible to run over to the other bulwark with the mobs that remain from the first wave. If not, the group on offense should abandon what they are doing and head over to defend the position instead.

On offense, you will be alternating between assisting the defenders with waves of mobs and attacking Sorceress when they weaken. The Sorceresses are Elite Masters with 33k morale, and the few minutes that they weaken should be enough time to take them down. Once a Sorceress' morale reaches 25k, she will call in several Elite and Normal mobs to defend her. They should be crowd-controlled with incapacitates and roots as soon as possible. Do not focus on taking them down, as you will be wasting time that could otherwise be spent ensuring that the Sorceress is defeated before she recovers, and they will retreat once this happens. If the situation mentioned above occurs where two camps come under attack, it should be your main priority to defend the second position. You can always defeat a Sorceress later, but if a bulwark claimed by the Enemy the instance will fail.

If all goes well, the bulwarks will be defended and the Sorceresses will have all fallen before the 45 minutes are up, at which point you can speak with Faelbenn to leave the instance and claim your reward. The quest is on a one-week cooldown, which means that players may only complete it once per week, per character. However, if someone else in the fellowship has the quest and enters the instance first, players who do not have it may still enter and participate.

The following table lists all of the possible groups of mobs that can spawn. It is usually best to deal with the weakest mobs first, followed by the Elites, leaving the Elite Master for last. In some cases, such as the group with Defilers that can heal considerably, take them down first.

Most mobs have a chance to drop Vile Bronze Coins and Vile Silver Coins, which can be bartered at Gath Forthnír for various rewards.