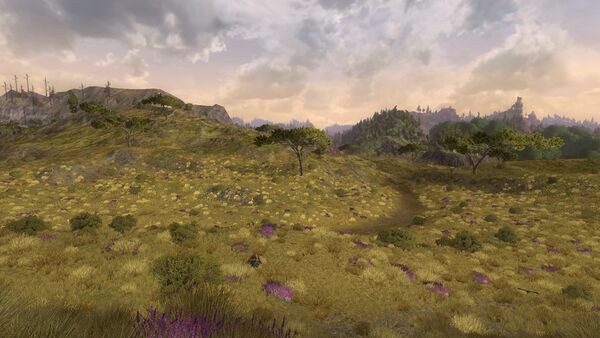 Talath Gaun is an area within the Lone-lands, in the eastern region.

This area embraces the Great East Road from about Ost Guruth and past the Last Bridge, embracing river Hoarwell. The area is hilly, wild, and dotted with small ruins. In its south-western section a tribe of Ogres (giants) have lived since ancient times, bothering none and caring little for the 'small folks' travelling to and fro.

Travellers should not stray from the road or they will face boars, crebain, orcs, wargs, and other lethal creatures. Recently some hearty members of the Eglain have set up camp at Dol Vaeg, a ruin north of the road, in an effort to press back the recent evilness. There a Travelling Vendor provides some services, as well as quest givers. 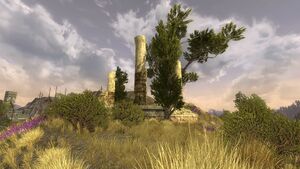 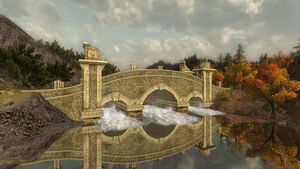 After some days travel from the Weathertop, on III 3018 October 13:
"They hurried along with all the speed they could make, and after a mile or two they saw the Last Bridge ahead, at the bottom of a short steep slope. They dreaded to see black figures waiting there, but they saw none. Strider made them take cover in a thicket at the side of the Road, while he went forward to explore.

"Before long he came hurrying back. 'I can see no sign of the enemy,' he said, 'and I wonder very much what that means. But I have found something very strange.' He held out his hand, and showed a single pale-green jewel. 'I found it in the mud in the middle of the Bridge,' he said. 'It is a beryl, an elf-stone. Whether it was set there, or let fall by chance, I cannot say; but it brings hope to me. I will take it as a sign that we may pass the Bridge; but beyond that I dare not keep to the Road, without some clearer token.'

"At once they went on again. They crossed the Bridge in safety, hearing no sound but the water swirling against its three great arches." — The Fellowship of the Ring, by Tolkien