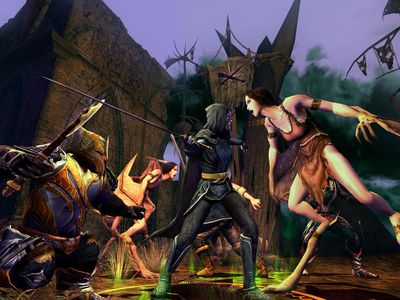 Strike Against Dannenglor, is a level 60-140 skirmish, is located within ruins in the Dourstocks in Mirkwood. Skirmishes, can be started by using the Instance Finder, (as long as you're not in an instance already).

Several Elves and Rangers have been taken prisoner by a sorcerer within the ancient Elf-ruins of Dannenglor. You must rescue them before its too late, using the Dark Gap back door.

This Skirmish has a minimum level of 60 and requires the completion of the quest Vol. II, Book 9, Chapter 4: First Offensives.

Fight your way thru the ruined courtyards and chambers. Each area is barricaded with a massive gate that will open once you capture the flag.

Simple boss fight against the sorcerer Authdurgul in a final showdown. Remember to loot the corpse before leaving.