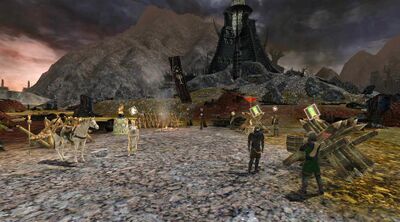 The Small Ranger Camp is an enampment located within the area of the the Slag-hills in the Wastes. [34.4S, 3.6W]

Across a series of wooden bridges over the foul water of the Slag-hills, west from the camp itself, Aragorn and several of his guards stand under the banner of the King. There is a horse here that will take you to the Battle of the Black Gate once you have made it to Book 8, Chapter 4: The Black Gate. [34.6S, 4.2W]

The following services can be found within the settlement of Small Ranger Camp:

There are two entrances to Dûm Boha: one at the second level of Haerondir [36.9S, 7.9W] and one off the plain behind Hareondir [36.1S, 6.5W] (the "main entrance"). If you first obtain the Bane of the Serpent from Gladhir in Haerondir and then proceed into Dûm Boha via the path behind him, you will receive the landscape quests below as you enter the camp. If you enter Dûm Boha from the "main entrance" off the plain behind Hareondir, you will get all quests bestowed as you enter.

The above fellowship quest is a prerequisite for the Lang Rhuven quest chain, which is found under The Wastes: Dagorlad Quests. Once you complete that chain, the quests below will unlock. Once these are completed, the fellowship crafting instances will unlock.

These quests offer a choice of crafting ingredients upon completion. For more information, see: