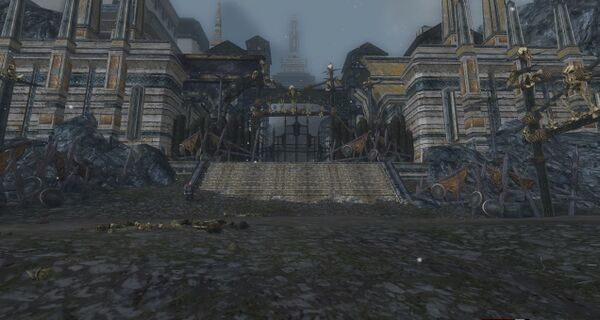 This world instance is part of the War of Three Peaks Instance Cluster. It was released in Update 28.

"It is on the stairs of Bagûd-mekhem, the Gate of Winds, that a decisive battle of the War of Three Peaks is to be fought. There, caught between those loyal to Gorgar the Ruthless and Hrímil Frost-heart, the Gabil'akkâ hope to deal a devastating blow to both of these forces in a single stroke."

It is available in the Instance Finder after completing Discovery: Shakalush, the Stair Battle.

This is a scaled instance, designed for a solo, duo and fellowship at level 130.
It is available in the Instance Finder.

Estimated completion time is between 15 - 40 minutes.

These mobs are encountered within Shakalush, the Stair Battle:

Azbauz and Maurgrush - Both of them have a bleed; to avoid stacking bleeds Tank holds aggro on Az and Maug whilst kiting Maug to stop him applying his bleed. Interrupt Az's Induction above 50% through the cast. The all the DPS kill Azbauz until he is dead; Then DPS Maug while the Tank is still kiting him. Always have Maurgrush facing away from the DPS and Healer to prevent them being hit by the Frontal AOE.

Shatarkha - This boss has two Crowd Control attacks - ICED where he freezes one person and a Frost AOE Cone where he will ice-blast one person (and anyone close to that person). He will pick one non-tanking-person at random for each attack, sometimes the same person twice. To avoid getting wiped DPS and Healers stand far apart in the 180 degree arc behind Shatarkha. The duration of the ICE is multiplied by the amount of people his second Frost AOE hits. So if it hits only one person you can the Ignore the ICE as it will wear off after the Frost AOE Cone. If everyone is standing far from each other only one person gets hit by the Frost Cone.

Groz and Ulk - Tank with back to the fence. DPS and Healers stand behind. Keep healing cooldowns for after his special attacks. Randomly he will throw a boulder at a non-tank person - this has AOE splash damage so spread out.

Most of the armour pieces and jewellery can be bartered for

Embers of Enchantment with the Shakalush Quartermaster, if you have completed the corresponding tier of the raid.