Located in Edoras, the Golden Hall of Meduseld is the seat of Théoden, the King of Rohan. The hall was described by Legolas in The Two Towers:

'I see a white stream that comes down from the snows,' he said. 'Where it issues from the shadow of the vale a green hill rises upon the east. A dike and mighty wall and thorny fence encircle it. Within there rise the roofs of houses; and in the midst, set upon a green terrace, there stands aloft a great hall of Men. And it seems to my eyes that it is thatched with gold. The light of it shines far over the land. Golden, too, are the posts of its doors.[1]

We first visit Edoras in: 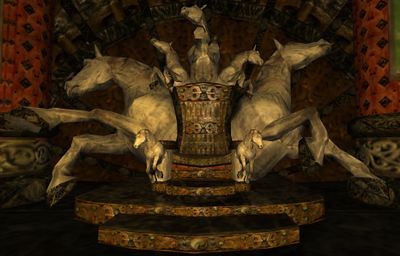 The Throne of Rohan in Meduseld

"Inside it seemed dark and warm after the clear air upon the hill. The hall was long and wide and filled with shadows and halflights; mighty pillars upheld its lofty roof. But here and there bright sunbeams fell in glimmering shafts from the eastern windows, high under the deep eaves. Through the louver in the roof, above the thin wisps of issuing smoke, the sky showed pale and blue. As their eyes changed, the travellers perceived that the floor was paved with stones of many hues; branching runes and strange devices intertwined beneath their feet. They saw now that the pillars were richly carved, gleaming dully with gold and half-seen colours. Many woven cloths were hung upon the walls, and over their wide spaces marched figures of ancient legend, some dim with years, some darkling in the shade.
But upon one form the sunlight fell: a young man upon a white horse. He was blowing a great horn, and his yellow hair was flying in the wind. The horse's head was lifted, and its nostrils were wide and red as it neighed, smelling battle afar. Foaming water, green and white, rushed and curled about its knees.

"Behold Eorl the Young!" said Aragorn. "Thus he rode out of the North to the Battle of the Field of Celebrant."

Now the four companions went forward, past the clear wood-fire burning upon the long hearth in the midst of the hall. Then they halted. At the far end of the house, beyond the hearth and the facing north towards the doors, was a dais with three steps; and in the middle of the dais was a great gilded chair."
-The Two Towers, 'The King of the Golden Hall'

Within the Golden Hall of Edoras, half-hidden in the shadows, hang tapestries describing events from the history of the Horse-Lords in pictures and in Old English words written with Anglo-Saxon fuþorc. They are not hung in chronological order.

As you enter the Mead Hall, look to your left. The tapstries are displayed as you move clockwise (to your left). Continue around the hall until you again reach the entrance. The quotations accompanying the descriptions are quotes from the Appendices.

In 2754, Freca, a wealthy and willful man with Dunlending blood, asked for Helm's daughter's hand in marriage with Freca's son Wulf. Helm, already getting on in years, refused; jabs veering into insults were exchanged. The men went out of the King's Hall, alone, and Helm struck Freca once, with enough force for the man to die soon after.
Afterwards, Helm was called Hammerhand, and all of Freca's kin were pronounced as enemies of the king of Rohan.

Aldor the Old (Eald) drives away (scuft) the Dunlendings

"In his time (2544 - 2645) the Rohirrim increased, and drove out or subdued the last of the Dunlendish people that lingered east of Isen."

Wulf, son of Freca, led the Dunlendings in 2758 and overran Rohan after Easterlings had already weakened the nation. Then came the Long Winter, and things went from bad to worse, with both of Helm's sons and Helm himself dying. After the Winter broke, though...
"Fréaláf, son of Hild, Helm's sister, came down out of Dunharrow, to which many had fled; and with a small company of desperate men he surprised Wulf in Meduseld and slew him, and regained Edoras."

Eorl the Young wades over (oferwæd) the Great River.

In 2510, "Eorl the Young came with his riders and swept away the enemy, and pursued the Balchoth to the death over the fields of Calenardhon."

In 2885, the twin sons of Folcwine, the elder brothers of Fengel, are slain in the service of Gondor, under attack by the Haradrim, and are buried in a single mound, Haudh in Gwanur, upon the shore of the river Poros.

"In his time there was war with Orcs that, driven from the North, sought refuges in the White Mountains."
The Orcs were fleeing from the wrath of the Dwarves and the Battle of Azanulbizar/the Dimrill Dale, in 2793-2799.
"2800 - 64 Orcs from the North trouble Rohan. King Walda slain by them (2861)"

"He was a great hunter, but he vowed to chase no wild beast while there was an Orc left in Rohan. When the last orc-hold was found and destroyed, he went to hunt the great boar of Everholt in the Firien Wood. He slew the boar but died of the tusk-wounds that it gave him." He lived from 2804 to 2864.

Saruman (searuman, man of skill) is given the keys (cáega) of Orthanc by the Steward of Gondor, Beren, in T.A. 2759, after Fréaláf reclaimed Rohan from the Dunlendings and was crowned king.

From top (near the throne) to bottom:

Where now-is horse and warrior? Where is warhorn blowing?
Where is helm coat of mail and beauty locks
flowing? Where is hand on
harpstrings and red fire
glowing? Where is planting and
produce and tall corn growing?

-The Two Towers, 'The Riders of Rohan'

(Further enlightenment can be gleaned from a bit in this video with Aaron Campbell.) MMO Reporter interview Beginning at about :30"

Daeross: SPOILERS: The Grandeur of the Epic

Like on the tapestries, at Eorl's Hallow, and the Stone of Wyrgende the runes used are the Anglo-Saxon fuþorc. For further information on the runes: