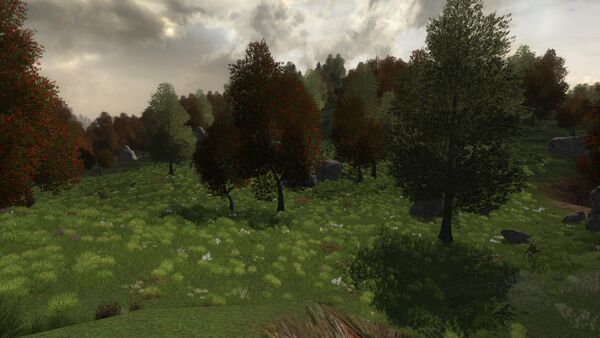 Glâd Ereg (Sindarin for Wood of Thorns) is an area within Eregion, in the northwestern region.

This is the first area encountered upon entering Eregion from Tâl Bruinen in the Trollshaws to the north. The area also borders the slopes of Pend Eregion to the east and the more barren and open landscape of High Hollin to the south. The area is entirely composed of dense woods and overgrown thickets as well as a single long trench running across the western edge of the forest. These trenches are a common sight in Eregion and are even more numerous in the areas to the south.

Recently the forest has been corrupted and the wildlife has become increasingly agitated due to the presence of wood trolls amidst Sâd Thareg and the plundering of the forest's resources by the Dunlendings in their lumber camp, Sâd Rechu. Worst yet, is that it seems that both previously mentioned forces are acting under the command of white wizard, Saruman. As a result, bog-lurkers and huorns now attack all who enter their sight making the once peaceful forest a hostile landscape.

Gwingris is found on the northern tip of Glâd Ereg overlooking the Bruinen. The elves stationed there are constantly combating the efforts to corrupt the forest as well as the hostile wildlife plaguing their supply caravans in the adjacent area of Pend Eregion. Likely the second largest outpost in Eregion after Echad Mirobel, Gwingris provides services such as a Stable-master, Milestone, Mailbox, Healer, Supplier/Provisioner. The region's Skirmish Camp can also be found just outside of the ruins' walls. In addition to all this, there are a plethora of quests available for those who wish to aid the elves in pushing back the forces of Saruman. 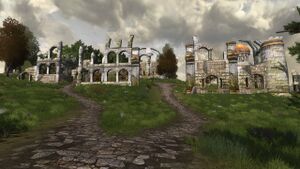 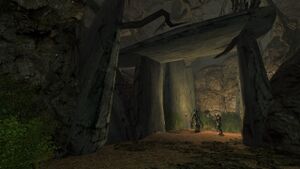 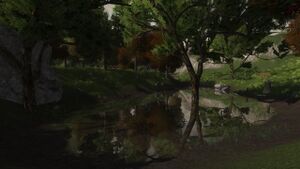