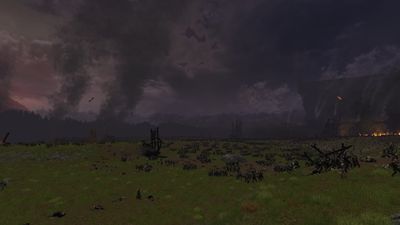 The Field of Onslaught is an area of Old Anórien, representing the Battle of Pelennor Fields at dawn, when the Riders of Rohan arrive.

It is first accessed during Epic Volume IV. Book 5, Chapter 8: The Ride of the Rohirrim. After this, it can be returned to by using the horse labelled To the Field of Onslaught in front of the City Stables of Minas Tirith.[65.6S, 16.9W] A corresponding horse labelled To Minas Tirith, Before the Battle provides instant transportation back to Minas Tirith.[27.2N, 16.6W] Once the other phases of the battle are unlocked, each can be returned to from horses that appear next to this horse:

Each of those areas also has a horse that allows one to return to the Field of Onslaught.

There is a group of standard vendors and a Forge-master at the rear of the Rohirrim ranks.[27.4N, 16.5W] A Quartermaster (Pelennor Battle Rewards Vendor) stands a little farther ahead.[27.2N, 16.7W]

The groups of fighters cannot be interacted with, but many Orcs have broken free of the ranks and can be fought.

Field of Onslaught is the 1st stage of the Battle of Pelennor Fields and contains one World Instances found in the Instance Finder panel and two quest instances:

See "list of NPCs" within the Field of Onslaught 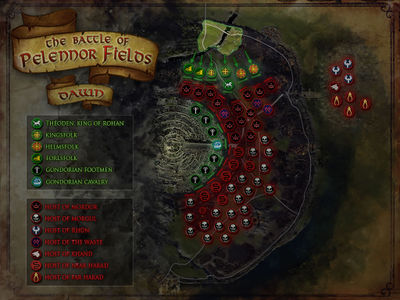 With these words, Théoden leads the Riders of Rohan into battle. He rides at the front of his host, followed by Éomer, though he cannot be overtaken. The Rohirrim sing as they slay, and they drive the hosts of Mordor before them.[1]

Marshal Elfhelm and his company keep to the right, near the city wall, where they attack the siege-engines.[1][2] The Riders Three arrive on the field and endeavour to fight their way to the King's side, while remaining alert for the traitor who killed Léofdag to reveal himself.[3] Nearby, Reeve Fastred seeks Crúmgam, the Man of Mordor who threatened the Sutcrofts, and he from whom the traitor takes his orders.[4][5]

Bregdal, Errand-rider of Gondor, tasks a small fellowship of adventurers to confront the King of Harad, the Black Serpent. Variags have also taken to the field, under the command of Jarl Dauthar, who has been tasked by Gothmog to capture these adventurers. The Jarl and his men are vanquished, and the Princes of Harad are also slain before Théoden charges in and personally kills Kâlach Hûl, the Black Serpent, at the site of what will soon be known as Kings' End.[6]