This article is about the army of the Free Peoples of Eriador which the Freeps can join to partake in PvMP. 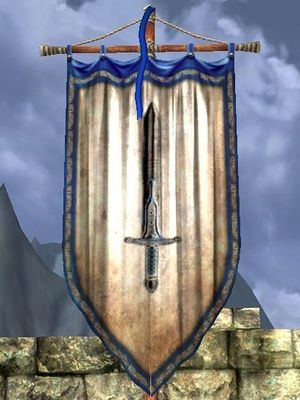 The insignia of the Coldfells Army

The Coldfells Army is a host made up of different inhabitants of Eriador. It was established by the Elf Lainedhel of Rivendell when whispers of a Shadow spreading out of the old witch-realm of Angmar arose. Against his Lord's will, Lainedhel left the elven refuge with all who would follow him and marched into the Ettenmoors to the north-west, a forsaken and twisted wilderness which had become the staging ground for an invasion from the north. At the foot of Mount Gram, the reestablished Army of Angmar built a great war-camp where they muster their forces and plan to launch an assault into the south, following orders from the false steward Mordirith.

Lainedhel sent out a call to the dwarves of Othrikar, the Rangers of the North, and the Eglain, a tribe of Men who dwell in the wastes of the Lone-lands. As the Free Peoples of Eriador gathered beneath the banner of the Elves, they built the first of their fortresses: Glân Vraig. The unwavering stand taken at the forest’s edge gives Angmar’s army little chance to force the Free Peoples from the holding. The fortress is of Elven make and stands out as a beautiful reminder of the lands that lay south of the now corrupt and lost to evil for many years area of the Ettenmoors.

After they established their holdfast at Glân Vraig, Lainedhel's host marched north to the ancient Rhudauran castle of Ost Ringdyr. It is here that Lainedhel set up his command post for the war in the Ettenmoors. Scouts were sent east into the Hoardale where they discovered the hidden Hobbit-village of Hoarhallow. An alliance between the Hobbits and the Coldfells Army was made, which saw some of the sharp-eyed halfling archers join Lainedhel's rank in exchange for protection of their village from the forces of Angmar. The Free Peoples found additional allies in the Morningthaw Bears and their leader, Old Goldhead, who had been fighting Mazauk and his vile Shadowmaw Wargs for years. The Eagles of the Misty Mountains sent a number of their ranks lead by Golloval to aid the Coldfells Army against the Grimfang Spiders and their brood-queen Gorgoris who had allied themselves with Angmar.

Soon after, the first large scale assault was made in order to halt Angmar's invasion of the south and drive them back to the ashen wastes of the witch-realm. Taking Mordirith's forces by surprise, the Coldfells Army swept through the Hoardale and the Steps of Gram, but they could not take Gramsfoot. When word of the siege reached Carn Dûm, War-tyrant Akúlhun of the Krahjarn Orc Tribe was dispatched with a large host of his tribe to support the Ongbúrz Orcs who were holding Gramsfoot. The Coldfells Army was forced to retreat.

The Ettenmoors are now locked in a stalemate with the Army of Angmar holding Gramsfoot and the Steps of Gram while the Free Peoples secure Glân Vraig and the Coldfells. Three large keeps once constructed by the Dúnedain of Rhudaur have become hotly contested by the opposing forces since they hold great strategic value and serve as lookout-posts to spy upon the Enemy: Tírith Rhaw, just west of Ost Ringdyr, is associated with the Free Peoples and helps them hold the Coldfells. Lugazag, on the edge of the Steps of Gram, is often held by the Army of Angmar and secures the road to Gramsfoot and Dâr-gazag, where the main force of Angmar's host has made camp. Tol Ascarnen, the central castle, is located on an island in the middle of the Hoardale river, controlling the only crossing of the river north of the Last Bridge. To the north, in the area called Arador's End, the Isendeep Mine has been rediscovered and holds valuable resources used to resupply the armies with weapons and armour. In the forest of Hithlad, the Grimwood Lumber Camp yields precious wood to build palisades and siege-machines for the Free Peoples - if they can remain in control of the lumber-yard.

With resources running low and troop morale dropping lower with each passing day, Lainedhel has sent four recruiters into Eriador to try and find courageous individuals who would take up arms in defense of the West. They can be found in Esteldín, South Bree, Thorin's Hall and Michel Delving. Stable-masters in these locations have trained their horses to find their way to Glân Vraig and are offering passage to the safe base of the Free Peoples. Sergeant-at-Arms Ascwyn is charged with welcoming new recruits and giving them an overview of the current situation in the Ettenmoors.

Players can join the Coldfells Army by reaching Level 20 and travelling to Glân Vraig where they can help the Free People's cause by completing quests and defeating the enemy. By doing so, they can raise their Rank within the Coldfells army to arise from a mere recruit up to the high status of Captain-General. VIP Players can participate for free, while Free and Premium Players can purchase a temporary pass for 20 Mithril Coins.