Players may have up to maximum 46 characters per server per account. Depending on account type the base limitations are:

To the base limitations you may add two character slots with the Mines of Moria expansion, one with the class Beorning, and you may purchase additional slots, up to the total of 46. For detail, see character slots.

Level represents the experience and strength of characters, NPCs, and Mobs, friendly and enemy alike. The maximum level (or "level cap") is 140. Each level requires an increasing amount of experience points, regardless of race or class.

Character statistics are values that determine how effective the character is at dealing and defending against damage, resisting negative effects, healing, and much more. Stats are influenced by level, equipment, traits, buffs and debuffs.

All characters have the same equipment slots, but due to proficiency limitations may not be able to use them all.

This is a tab on the Character Journal page in game. It allows you to set up a biography about your character, including a description (up to 2000 characters) and a family tree.

To create a familial relation, you can target another player character and use the /adopt command. This makes them your offspring, assuming your generation is a higher number than theirs. Being in a familial relation grants both characters a new title. For example: Mother of <name> and Son of <name>. A character can have one parent and up to two children.

To break a familial relation see a Notary.

This is a tab on the Character Journal page in game. These are your character's statistics in Monster Play, also known as PvMP. The following stats are tracked on this page:

A character's level is determined by the total amount of Experience Points (abbreviated XP) which that character has gained over their lifetime. XP is granted for defeating enemies and for completing quests, deeds or crafting according to the difficulty of the task that was completed, relative to the current level of the character. XP is granted from kills you initiate on your own or if another character dealt damage before you -- see Open Tapping and Experience points for important details.

Enemies have a designated level (which can be seen by clicking on the enemy). This level determines their health and strength, and helps the player recognize enemies that are appropriate opponents for them. A more detailed explanation of enemy levels and the challenges they present can be found here. Enemies who are nine or more levels beneath you will not grant any XP, even if they are Elite or Master Elite enemies.

Similarly, quests have designated levels (seen in the Quest Log) which indicate to the player how difficult they will be for their character to complete. For example, a level 10 character will receive a great deal of XP for completing a level 15 quest (if indeed they can manage to do so), while the same character, upon completing a level 5 quest, will receive barely any XP at all. 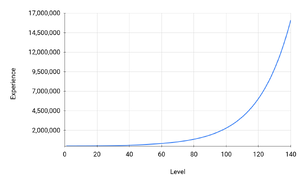 See also Character XP Calculation for information about how the XP is calculated.

Destiny Points is a type of game "currency" that can be used to buy temporary buffs. You earn 200 destiny points for every level your character gains after level 9.

Destiny points may only be spent by VIP accounts.