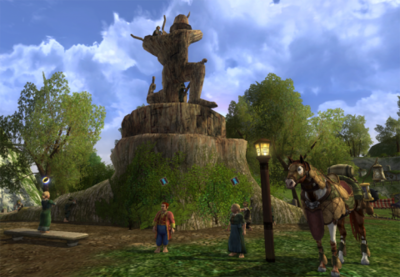 The Bounder's Bounty event was held prior to the release of the Helm's Deep expansion in November, 2013, and involved players turning in tokens dropped by creatures around Middle-earth and rewarded by certain quests to reach a common server-wide goal and unlock various rewards.[1] 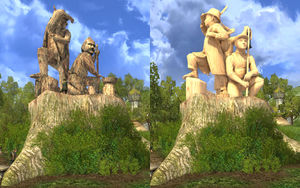 The Bounder's Bounty statue before (left) and after (right)

When first obtaining a Bounder's Token, a quest directed you to Meg Proudfoot, the Bounder's Token Collector, who stands next to the statue in the center of Michel Delving. She collected all donations of Bounder's Tokens throughout the event in stacks of 50 tokens at a time. The tokens donated contributed to the server goal of 1,750,000 tokens.

The Bounder's Bounty Vendor, on the other hand, was unlocked only when the server as a whole reached the Bounder's fund-raising goals. A tooltip on the statue displayed the server's current collection progress. This vendor included a War-steed and mount bundle, a Hobbit-themed Steed of Michel Delving, a Tarnished Symbol of Celebrimbor package and select store items. In addition, while the two vendors had many of the same items, the Bounder's Bounty Vendor sold them at a discounted price.

Bounder's Boon buff which persisted until the launch of Helm's Deep on November 18, 2013. 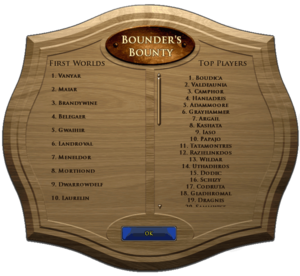 The finished statue's plaque from the Withywindle server

Beginning with Update 12.1, the finished statue in Michel Delving displays a plaque with the first ten servers to reach the token goal, and after Update 12.2, the plaque also shows the top 50 contributors for each server. Player contributions are counted by account and server meaning that a player's contribution from all characters on a server are totaled and ranked, and the character that contributed the most on that account is listed. [3]

Deeds are bestowed on the turn-in of your first 50 tokens for the Quest: Aiding in the Bounty

An Open Letter from the Bounders of the Shire[4]

Good Gentlehobbits and Friends of the Shire, the Bounders are calling for your aid!

The Shire has long been a happy, quiet land, with little need to know of or care about movements in the great lands beyond. However, in the last years, threats have been increasing at our borders. Strange persons and creatures can be seen prowling in ever greater numbers, with the once exotic glimpse of a travelling elf or dwarf growing more common by the day.

Were but wandering elves and dwarves our greatest threat, we would have little need for this call to service, but there are other shadowy things lurking and prowling. The need for Bounders has never been so great, and the need for those Bounders to be well-armed and well-trained is ever greater.

With this in mind, we call upon all Free Persons to aid in our cause! In your travels and adventures, you may come across Bounder's Tokens, nothing more than bits of scrap and trinkets. The Bounders will take this waste and re-smelt, re-furbish, trade and sell the proceeds to gain resources for our ranks. Any time you find yourselves within the borders of the Shire, bring any such miscellany to the group of Bounders posted close to the statue in Michel Delving centre. We hobbits of the Shire are not well known to those beyond our borders, but we assure you we are of a generous and sharing nature! Therefore, in expression of our gratitude, we have established a series of rewards and enticements to encourage contribution to our cause!

Any person who is singularly generous will find that they will be granted access to a wide variety of unique goods to purchase in exchange for additional tokens, naturally! However, if the free folk all band together to meet our full fund-raising goals, the Bounders have even larger rewards in store. Additional items will be available for barter, a large monument will be erected in Michel Delving commemorating the achievement, and all persons will find that their generosity will fill their heart such that they are a bit quicker, stronger and braver than they once had been.

We of the Shire thank all our friends for their help. With your assistance we can keep our grasses green, our feet furry and our larders well-stocked as we of Middle Earth go through these trying times together.