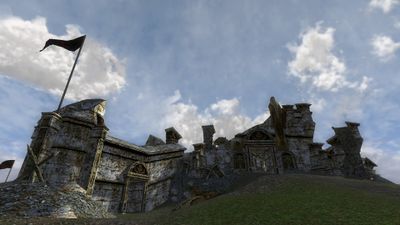 Called the "Hill of the Eye", Amon Hen is a high hill of the Emyn Muil situated on the western bank of Nen Hithoel, where the southward rushing waters of the Anduin River plunge over the Falls of Rauros. Along the eastern bank lay another high hill, Amon Lhaw - the "Hill of the Ear" - and these two landmarks were a pair.

At the top of Amon Hen was an old Gondorian fortification, generally known by the same name. Within lay the Seat of Seeing, an enchanted relic of the past which allowed some skilled users to hear what occurred at other locations. It matched in relative power the might of its sister fortification, Amon Lhaw's Seat of Hearing. Once used to watch over the northern bounds of Gondor, the watchtowers have fallen into neglect as they are now rarely visited or used by their creators.

Amon Hen, Sindarin for "Hill of the Eye", is commonly used to refer to the Gondorian watchtower situated on its peak. In centuries past, Amon Hen, along with its sister watchtower, Amon Lhaw, or the "Hill of the Ear," watched over the northern bounds of Gondor; however, the watchtowers have fallen into neglect as they are now rarely visited or used. It us upon the seat of this watchtower that Frodo resolved himself to cast aside the Fellowship and carry the Ring alone to the Fire.