There are three Account Types available to new players in Lotro today, Free to Play, Premium, and VIP (subscribed). They give different benefits and bonuses. This page summarizes these differences.

Free to Play (abbreviated F2P) was launched in the fall 2010 and introduced a new business model. Players can play for free with some restrictions and remove those restrictions by making a purchase in the in-game Lotro Store with LOTRO Points (LP).

You will automatically be upgraded to Premium player status with your first purchase of something for real world money, e.g. LOTRO Points, etc.

VIP ("Very Important Person/Player") status is one of three types of accounts a new LOTRO player can have today. As a player with a VIP account, you have unlimited access to all game content; only expansions must be purchased. VIP is another way of describing a subscriber. Please see VIP Account Discussion below for a detailed description of this account type.

A player who pre-ordered the original Shadows of Angmar release in 2007. Benefits at the time included participation in the beta testing, special lower pricing for monthly and lifetime subscriptions, and special benefits for all characters (a ring of agility +3 and a special cloak). When Free to Play was released in 2010, Founders automatically became VIPs, as long as they kept paying their monthly fees (or were Lifetime members).

Lifetime subscriptions were offered to Founders at $199.00 USD. After release, the Lifetime Subscription was offered to others for $299. This subscription option was discontinued in 2009. SSG, has said many times officially and unofficially they have no plans to ever offer this option again.

VIP ("Very Important Person/Player") status is one of three types of accounts a new LOTRO player can have today. As a player with a VIP account, you have unlimited access to all game content; only expansions must be purchased. VIP is another way of describing a subscriber.

For a monthly fee, Lotro’s VIP program offers the best value and the most options for players who like the convenience of having unlimited access to all of Lotro’s game content and features.

Currently, VIP status can be acquired by maintaining an active subscription through the LOTRO in-game store LOTRO Store interface (requires a credit card or PayPal account).

In the past, there were several other ways to acquire VIP status:

While LOTRO can be played for free without an active subscription, being a VIP player unlocks many elements of the game that non-VIP players would have to unlock with LOTRO Points or cannot use at all. Benefits of VIP status are: 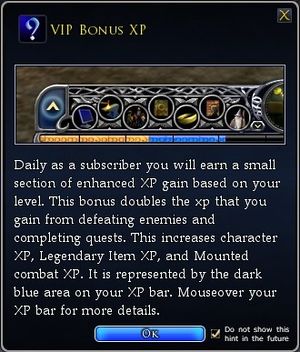 (*)= These features cannot be purchased from the LOTRO Store and are exclusive VIP features.

Having VIP status also has some elements that some players may find undesirable. These are:

If a subscription is cancelled or the time of a game card expires, a VIP account is automatically downgraded to a Premium account at the end of the remaining subscription period. Some features are maintained while most are no longer available.

Some features are maintained on a per-character basis when downgrading from VIP to Premium. However, these features, listed below, are maintained only for characters who have entered Middle-earth (logged in) while the VIP status was active; characters created after downgrading from VIP to Premium and characters that were created before or during VIP but were not logged into the game during VIP do not have access to these features. These per-character unlocks also function for content the character hasn't reached yet due to level or other restrictions.

The following features are maintained on a per-character basis:

Downgrading removes all VIP features not described in the previous paragraph. Handling of the removal of some of those features is described below:

Here are the benefits for each player status: