The Witch-king of Angmar was originally a great Númenórean king. In the Second Age, he received Un (Heart-stopper), one of the nine Rings of Power given to men by the Dark Lord of Mordor, Sauron. The Rings gave them incredible power, which they used to further their own ambitions, but eventually the Rings completely corrupted them and turned them into the ghastly Nazgûl.

He founded the kingdom of Angmar. It is after the formation of Angmar and several conflicts with the Dúnedain of the North that the Lord of the Nazgûl became widely known as the Witch-king, Lord of Angmar, reflecting the fact that he practiced black sorcery. Because of the great havoc he wrought in the north, he became notorious among the peoples of Middle-earth as the terrible Lord of Angmar; thus, he thereafter retained his title of Witch-king, even long after he left Angmar.

He is encountered several times.

The Witch-king of Angmar (Second Age)

The Witch-king of Angmar is first encountered by High Elf characters in the year 3434 fighting against the host of the Last Alliance during the siege on the battle plain at Dagorlad at the end of the Second Age.

How he appears at Main gates in:

The Witch-King appears in the Othrongroth instance,(in volume I book I.) but is not an enemy, however he screams like the Nazgûl often do,causing the player to cower in fear and adds +9 dread. Also, in the introduction cutscene he is standing at The Witch-king's watch calling forth an army "from the depths of Carn Dûm". He appears at Dâr Dugoth during the Sundering of Osgiliath, holding council with the other eight Nazgûl. The Witch-king can be seen during the Epic Battle: Hammer of the Underworld, breaking the gates of Minas Tirith. He also appears in instance The Darkest Hour in his the most powerful form.

The Witch-king of Angmar makes his final appearance during the instance Death Comes for All. 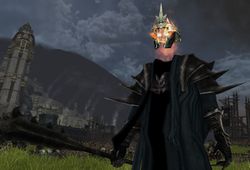 The Witch-king during the Battle of Pelennor Fields.