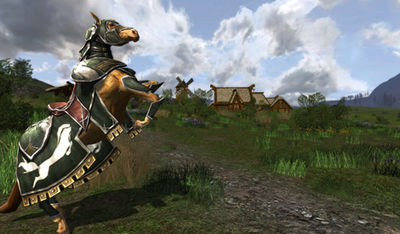 "How do I get my War-steed and participate in Mounted Combat?"

Anytime after level 71, visit Dala in Langhold, Rohan. Accept the quest "The Wold". It begins the questline that culminates in Quest:Devastation in the North. Other options are explained below.

Another question is: "How do I get to Rohan?" There are two approaches, presenting two different quest arcs:

Both of these quest arcs cross at Langhold, where one begins the Langhold Quest arc, culminating in Harwick where one obtains one's War-steed.

All 12 quests in this arc must be completed before one can move on to the Harwick Training Grounds (Harwick Stables) and obtain one's War-steed.

The maximum level of the War-Steed is 60 and you will have 87 trait points to expend.

From the Q&A... Riders of Rohan Pre-order FAQ

5. Can I fight from my existing in-game horse?

No, you will get a new steed, called a War-steed specifically built for combat. It’s larger than the current in-game mounts and better able to handle the demands of combat.

It can be hard to maneuver War-steeds in towns, so you may want to switch to your regular horse for that. It is possible to ride a War-steed in town with practice.

Not only are the War-steeds heavier than our regular riding mounts, they are physically bigger.

As for narrow bridges, the problem with the bridges is usually you have to turn to get on them, and the speed issue can make you turn wide and continue off the edge into the water. But as soon as you slow down to make that turn to cross the bridge, or if you have a straight approach to the bridge, crossing it is no problem.

So, to answer the question, "What's it like to ride a War-steed" in LOTRO, it's much more realistic than riding the normal travel mounts you have collected. There are advantages to this realism, and there are disadvantages.

In America, you will rarely see horses this large, two notable exceptions being the Budweiser Clydesdales and the Percherons and Belgians that Disney exhibits at their theme parks. Those horses weigh in at over 2000 pounds each, compared to the Quarter Horse at 1200 pounds, (The Quarter Horse is typified by those you see at rodeos or Western riding events) or the Tennessee Walking Horse at about 1000 pounds.

A horse's height is measured to the base of the back of its neck. The Quarter Horse, or Tennessee Walking Horse, which many consider to be an average size horse, stands between 15 and 16 hands, or 60 to 64 inches (roughly 5 feet tall), and usually weighs around 1,000 pounds. A draft horse, by comparison, stands around 17 to 18 hands, or 68 to 72 inches (roughly 6 feet), and usually weighs over 2,000 pounds. And remember, in both cases the measurement is to the Horses BACK. It's head is roughly another 2 feet above that!

The animal often called a Mustang or American Indian horse is the horse most often associated with American Western stories. This horse is around 13 and 15 hands tall, and typically weighs less than 1000 pounds. In general, it is descended from horses brought to this continent by the Spanish Conquistadors.

There are three types of War-steeds, and while the mounts themselves are not specific to individual classes, their characteristics will allow you to mix and match with your class abilities and your play style.

A fast and agile Light mount, a Courser's greater speed allows them to build Fury at a quicker pace, allowing the execution of more devastating Fury-fueled attacks. Great speed comes at the cost, however, as their Endurance and Armour is reduced.

This is a moderately armoured Medium steed providing balance and stability without sacrificing or favouring survivability or manoeuvrability. Riders of the Rouncey are usually more focused on close combat, blending greater offence over defence and support tactics more evenly than its lighter and heavier brethren.

This Heavy mount protects more than it speeds. The Destrier's greater armour allows them to take more damage and their enhanced Power allows extensive use of special mount charges and abilities. In trade, a slower speed makes for slower Fury generation and less overall mobility.

Your first horse looks like it defaults to the The Rouncey.

To change the type of horse, at any time, you must use the Refund Points button (on the Mounted Combat panel, Traits tab) to recover all the points you have spent on traits. On the horse type selection panel, click Enter under the type of horse you want to ride, allocate the available points between your traits, and press Apply. If you are mounted, you will be dismounted, and the available mount skill will change to the new type.

How to change to Light or Heavy Warsteed from the beginning: You may change your horse to the type you want during the Tutorial quest. To do so most simply, wait until you have one trait point (early in the training process), then dismount. Go to the menu and choose "Mounted Combat" (default keyboard shortcut is "Shift-M") which should show you a choice of Light Medium or Heavy. Spend the one trait point, and click "Apply". You must click "Apply" to see a change in the icon from "Medium" to "Heavy" or "Light."

Barding is armour for horses. In Lotro, distinctive barding is available for your War-steed to allow you to customize its appearance.
Note however, that none of these items change any War-steed stat. War-steed stats are only modified by points applied to War-steed traits.

As you complete quests and turn in certain Tasks (look for the Warsteed Experience icon in the listed quest rewards), your War-steed gains experience. As it "levels-up" you gain points which can be applied to "Traits" which define your War-steed's capabilities.

A common tactic is to use Tasks to level the Warsteed. Punctured shields may be available for sale in the Auction House. One reason may be that they are useful for so many reputations, but another is that they can be used in Harwick and several other places to complete Tasks that give Warsteed experience. You may grind for them by finding orcs, Uruks, and Easterlings throughout Great River, the Gap of Rohan, or The Wold.

Note that the terms "Mounted Stances" and "Mounted Disciplines" refer to the same things. 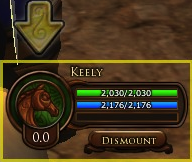 When you mount your War-steed, A new display shows the vitals for your War-steed.
Like other User Interface (UI) items, the War-steed Vitals can be moved using ctl-\

You can control the movement and speed of your War-steed in several different ways, just as you control normal character movement.

NOTE: For better control, consider adding more agility to your War-steed, some relics also provide a bonus to "Turn-rate."

When first learning to ride, this is a common comment:

I took my War-steed into town to actually practice polite riding skills. It is difficult!
It would be convenient if there was a "low" gear that we riders could drop into, like a canter or fast walk at a consistent speed.
This would add to the ambiance of travelling in a group, and make it easier to pass through towns.

This is easy enough to do.

There are four speeds when riding: Walk, Trot, Canter and Gallop. Each speed is visible in the Mount Display panel -- the yellow bar, and the actual number beneath the horses portrait. (Note that the number associated with each speed is different for each War-steed type - Light, Medium, and Heavy, with the Light War-steed moving faster at each speed type than the other two.

You simply "tap" (instead of press and hold) your forward movement key (default="W") and you can easily move at all four constant speeds: Walk, Trot, Canter, Gallop.

You just need to have the option turned off, which is off by default: Options/Combat Options window: - at the bottom: Mounted Combat: War-steed Auto-slowdown.

You can also "lock out" higher speeds using the Insert key. (The key bound to "Walk Mode" in your Options/Key-Mapping window.) Pressing "Insert" will display the message: "Your war-steed will only Walk" in the Chat window. Your movement rate will then be limited to 5.8 meters per second on a Medium War-steed, 6.0 on a Light, and 5.5 on a Heavy.

Even at a canter, it is pretty easy to wander through a town and turn, although a trot is probably the easiest in older towns with more narrow ways as it is closest to the "run" speed of a "conventional" mount.

There is also a skill available from the LOTRO Store called Smell the Roses that removes mounted speed buffs while active, although this effect is minimal.