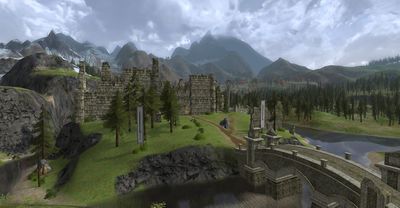 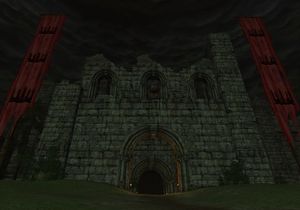 Tol Ascarnen (sindarin for "Isle of Rushing Water") is one of the five contested landmarks in the Ettenmoors. Once a great fortress of Rhudaur built at the northernmost crossing of the Hoarwell river, Tol Ascarnen fell into ruin after the end of the witch-realm of Angmar. Now, the recent conflict in the Ettenmoors sees the island permanently contested between the Coldfells Army and the Army of Angmar because it has great strategic value serving as a lookout post across the Hoardale.

Central to the Ettenmoors and positioned on an island in the middle of the Hoarwell River, Tol Ascarnen [16.8S, 17.0W] is a defensible stronghold. Bridges lead to the island from the east and from the west, and forces may be able to find purchase through the river. To the north, a magnificent waterfall towers high above the fortress at the foothills of the Misty Mountains and Arador's End.

The keep has three entrances, one to the west, one to the south and another to the east. There are two stairs leading up to the final room where the Tyrant/Captain-General is located. On the ground floor, there is a hall to the north of the eastern gate. This room houses the quest NPCs. If the oil and iron gathering quests have been turned in ten times, an iron cauldron will be installed above the southern entrance which does damage to all foes entering the keep here. On the floor above the quest hall there is a room containing a backdoor exit leading to the northwestern corner of the fortress. This backdoor can be used by anyone to exit Tol Ascarnen but only the side currently holding the keep can use the backdoor in the opposite direction.

The two bridges providing the main approaches to Tol Ascarnen are:

Tol Ascarnen to the side in control of the keep. This effect grants +20% Infamy/Glory and Commendation gain. Control of the Keep changes immediately on defeat of the Tyrant/Captain-General and the symbol on the in-game map will change accordingly.

Tol Ascarnen will house NPCs and quests associated with the side currently holding the fortress. All quest givers can be defeated by the opposing side, thus making their respective quests unavailable until they respawn.