"I have seen enough. The time of the Eldgang ends now! Run for your lives if you wish to save yourself."
"ENOUGH!" (after Defilers are defeated)

Once you enter the arena the Ever-seer is convincing one of the otherwise friendly giants that you are bad people who want to hurt him. To convince him otherwise you have to keep him tanked while you deal with the adds. It is not possible to defeat him.

Four waves of adds will need to be defeated before Thrâng enters the fight: 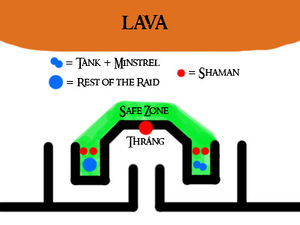 Positioning when defeating the Defilers.

The four waves of adds mentioned above will be spawning near the top of the stairs. Everyone except the tank on Eimyr should work on taking them down. Make sure not to put any bleed effects on the last Summoner in the final wave. Once he reaches around 1-2k morale, stop all damage and crowd-control him. Finish off any remaining Fire-worms, and then get into the positions shown on the image to the right, with the Main Tank and a Minstrel on one side and everyone else on the other. If the group has two Lore-masters, one can go to each side to provide support. The same applies if the group has 2 Captains. It is a good idea to keep the last Summoner crowd-controlled while everyone heals, buffs, and gets into position for the final stages of the battle. Once everyone is ready, have one or two Hunters use Heart Seeker on the last Summoner to finish him off before he can summon another Fire-worm. The Lore-master can also use a stun to help prevent getting another worm add.

Eimyr will now leave, and Thrâng will enter the fight along with four Ghâshfra Defilers. The Defilers must be defeated before Thrâng can take any damage. Their melee attacks do mild Fire damage, they can place a nasty damage-over-time wound debuff on players, and they will cast interruptible Renewal effects on each other and on themselves that can stack. It is a good idea for Champions to use Clobber as much as possible. Burglars should use Addle as well. Thrâng will run down to the first landing on the stairs and remain there until the Defilers are defeated. If all players are in position and stay in the area marked as "Safe Zone", he will not be able to ranged attack anyone. The Defilers will come running down the stairs, two on either side, so players on both sides should pick up their two, with the MT and OT holding the aggro. Don't panic if three Defilers end up on one side, since it is still possible to pull one over to the other side or simply to DPS through three Renewals.

Once the Defilers are defeated, Thrâng will come down from the stairs and melee attack the highest player on the threat list. This will most likely be a Minstrel due to healing threat. Though he no longer has his damage reflection buff, he now has a Tempered by Flame effect on him that negates almost all (about 99%) incoming damage (although he can still be debuffed). The MT should immediately use a taunt in order to grab a hold of him. The damage reduction on Thrâng can be removed temporarily by pulling him next to one of the many Fumaroles found around the bottom of the arena and causing it to explode. The explosion is triggered by a 5 second induction that starts once a player runs up close to it, and once it explodes it deals around 1,500 Fire damage and stuns anyone within approximately 5 meters. If Thrâng is within the explosion radius, his buff will get replaced with a vulnerable effect for 15 seconds. During this time, go all-out on the DPS while the MT is pulling him to another Fumarole. Lore-masters should keep Stun Immunity on the MT and melee DPS classes. Everyone other than the MT and melee DPS classes should stand on either the north or south staircase in order to avoid activating a Fumarole by accident. They respawn after about a minute, so it's a good idea to simply use the four or five that are within healing range of the staircase. Repeat the process of pulling him from one Fumarole to the next until Thrâng is defeated. 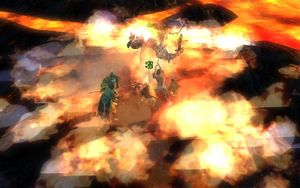 Loot for this instance comes from daily quests awarding Farmers Faire Tokens and Motes of Enchantment at 140. There is a chest at the end that awards 1 Thrâng's Vault Token, 0-4 Farmers Faire Tokens and a chance for a cosmetic two-handed sword, a scaled incomparable ring or bracelet or an epic pocket. The chest locks reset daily at 3:00 a.m. server time. Drops