This page is about The Great River, the region between Lothlórien and Rohan. For the river, see Anduin. For other uses, see Anduin (disambiguation). 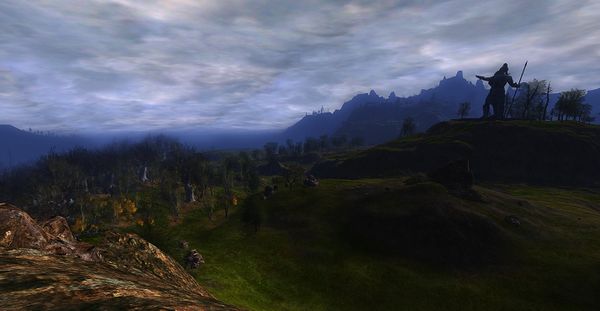 The shores of Great River, known as the mighty Anduin in Sindarin, touch many different lands. It flows from the Grey and Misty Mountains in far north, between Lothlórien and Mirkwood, through the Argonath into West Rohan and onto Gondor, before emptying into Belegaer, the Great Sea to the South. The signs of war lie along the shores of the Great River as Isengard and Barad-dûr put their dark plans into motion. Assist the Sentinels of Lothlórien in patrolling their southern boarders, seek out Galadriel’s wisdom and confront ancient enemies of Rohan, the Easterlings, as they gather for an attack on Rohan and Lórien.

The river was known as the Langflood to the ancestors of the Rohirrim, and was the longest in Middle-earth during the Third Age with an estimates total length of 1,388 miles (approximately 2,234 kilometres).

During the First Age, a stretch of land along the Great River was home to Entwives and their beautiful gardens. But this place of beauty was blasted by Sauron in the Second Age, and is now called the Brown Lands. The Great River is a divider; on the western bank is life, forests, tributaries and the like, while the east is wasteland, destroyed, rocky.

The Company of the Ring travelled along the Great River during the Third Age, pursued by Gollum and the orcs of Isengard, with Legolas bringing down a Fell beast with the bow he was given when leaving Lothlórien.[1][2][3][4][5] 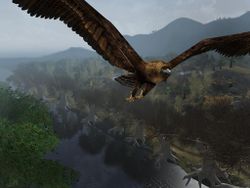 An Eagle soaring across the Great River

Graceful Swans hide the dangers of the Swamp 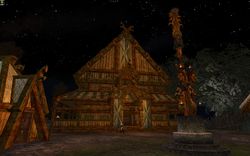 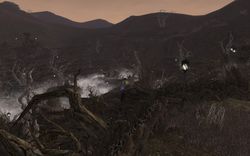 Fireflies in the Desolated Gardens of the Entwives 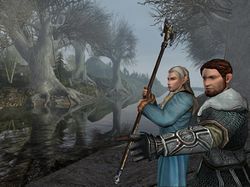 The Anduin flows through the region

An Elven encampment close by Lothlòrien

Southern foothills on the east side of the Misty Mountains close by, but below Fangorn Forest.

Central foothills on the east side of the Misty Mountains.

An old battlefield and a decaying fortification

A desolate looking land on the east side of the river.

Detail maps of the Great River 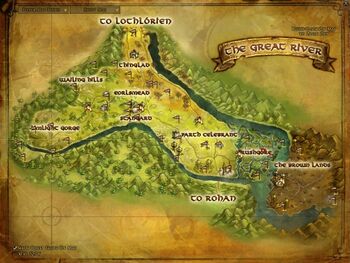 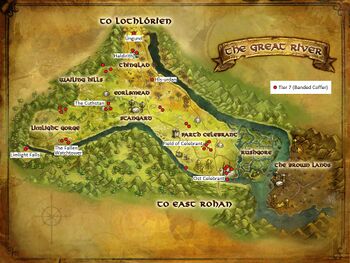