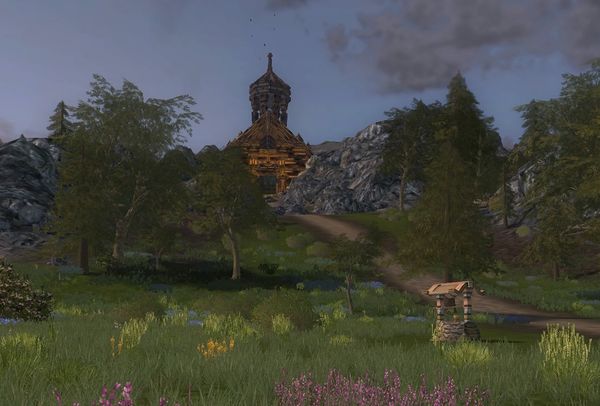 Ravenhill was an outlying hill beneath the height of Erebor, the Lonely Mountain. It stood at the end of a ridge of high ground extending southwards from the mountain itself, overlooking the River Running and the valley of Dale.[1] The Dwarves built a guard-post there, above which the Ravens resided,

Where they scouted the slopes of the Mountain
There lies all that is left of Dale,” said Balin.” “From Ravenhill, they could see the grey ruins of ancient houses, towers and walls.

Little Bear Ganker is also found in many locations around middle earth.

The Dwarves of Erebor have historically had a strong friendship with the Ravens. Today, Dís tends the remnants of that frienship of old as best she may.

The Dwarves of Erebor built a guard-post on the hill, about five hours march from the Front Gate to the Mountain,[2] and above its chamber for many years lived friendly intelligent ravens, like Carc. It was they, and the ravens of hill, that gave it its name.[2]

In T.A. 2941[3] Thorin and Company made their first camp north of the hill as they reached Erebor.[4] Much later the Company returned to Ravenhill when they made their escape from the Mountain. After spending one night in the rock chamber on the hill the thrush that they had last seen on the "Doorstep" came to them. When Balin wished that it was a raven the thrush flew off and brought back Roäc, who gave them the news of the death of Smaug and the approach of the Elves and Lake-men.[5]