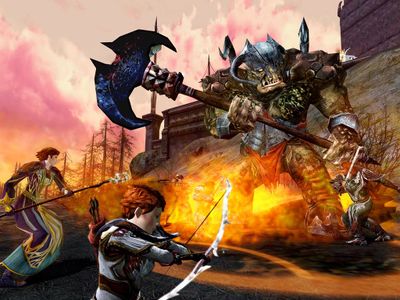 Protectors of Thangúlhad, is a level 60-140 skirmish, it occurs within the fortress of Thangúlhad in Gathbúrz in Mirkwood. Skirmishes, can be started by using the Instance Finder, (as long as you're not in an instance already).

Thangúlhad is being assaulted by the forces of Dol Guldur just up the hill. They wish to reclaim it and eliminate the foothold the Golden Host has secured.

This Skirmish has a minimum level of 60 and requires the completion of the quest Vol. II, Book 9, Chapter 14: Thangúlhad Endangered.

Talk to Rodelleth the commanding officer at Thangúlhad. She is waiting for you to report. Mobs will charge in waves thru the two Eastern gates of Thangúlhad. Rodelleth will fight with you and warn you which gate they are heading for, giving you time to man a catapult that covers that avenue of approach. You can launch a missile at the mobs before they reach the gate to make the battles a bit easier.

The boss fight against the gorthorog Mazaukal is a lot of fun. Head on thru the gate and meet him out on the North-South road. Rodelleth will help you out by launching catapult barrages at locations marked on the ground with squares. If you time it right, you can make short work of Mazaukal with a few missile strikes from Rodelleth. Remember to loot the corpse before leaving.