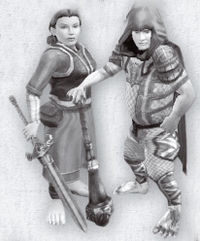 Happiest when enjoying a simple life with six square meals a day, Hobbits are a solid and dependable Race when called to action.

There are few recorded deeds of Hobbits until late in the Third Age of Middle-earth, which is just the way Hobbits prefer it. They are a simple, quiet folk, preferring to dwell in hillside holes in and around the land known as the Shire. These small folk enjoy the peaceful endeavors of farming, eating and gift giving, rather than concerning themselves with the dangerous affairs of the rest of Middle-earth.

In these dark days, however, it is the unassuming Hobbits, with their often surprising cleverness in both word and action, that will have the greatest impact in the war between the Free Peoples of Middle-earth and the lengthening shadows of evil... from Angmar, to the north.

These are obtained via completion of Hobbit Racial Deeds.