This page is about the epic battle instance. For the area, see The Deeping-coomb. 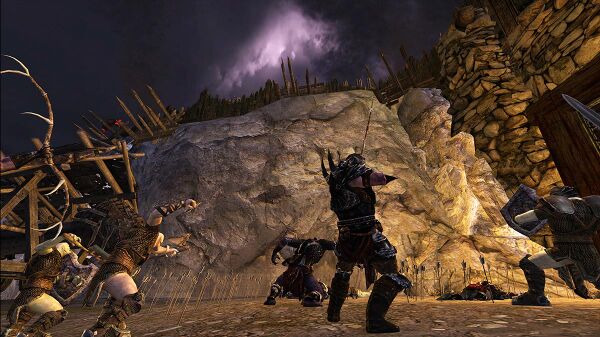 Helm's Dike is an Epic Battle instance, introduced in Update 12: Helm's Deep. It must be completed on Solo/Duo mode before other Epic Battles from the Defence of Rohan can be attempted.

This is a scaled instance, designed for solo, duo or fellowship (6 players) from level 10 and up.
It is available in the Instance Finder and the Road to Battle panel.
Estimated completion time is between 30-45 minutes.

Quests can only be completed once per day and can be run Solo, Duo or in a Fellowship [100] Epic Battle: Helm's Dike

Possible side objectives for Helm's Dike.

Helm's Dike is an ancient earthen wall and trench which stretched across the entrance to the Deeping-coomb, a quarter mile ('two furlongs') before the Hornburg, with the twenty foot tall rampart serving as the first line of defence for Helm's Deep. On 3 March TA Aragorn, Legolas and Gimli together with King Théoden, Éomer and a band of Rohirrim Riders crossed the dike on their way to the Hornburg. Defence of the trench was led by Gamling, who managed to retreat after the dike was overrun during the early stages of the Battle of the Hornburg.[1][2][3][4]