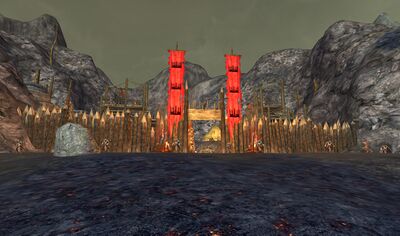 Gramsfoot is a settlement located within the area of Steps of Gram in Ettenmoors. [12.5S, 20.9W]

Located in a secluded pocket within Mount Gram, to the far northwest of the Ettenmoors, Gramsfoot is a starting location for Monster Play Character in this region. It is also a primary stronghold for the Creeps and it that cannot be attacked by the Freeps. Furthermore, its gate prevents any non-Monster Player from entering it.

Mount Gram, nestled at the northwestern edge of the Ettenmoors in the Misty Mountains, has long been an abode of goblins, though their greatest king, Golfimbul, was defeated and slain by Bandobras "Bullroarer" Took at the Battle of the Greenfields hundreds of years ago. Lying at the border of Angmar, Mount Gram has again become a fortress-kingdom of terrible power. Orcs, wargs, goblins, trolls, and other evil creatures now muster there to begin an invasion of Eriador.

The fortress of Gramsfoot is a heavily guarded stronghold at the base of Mount Gram, nearly invulnerable to attack. As the army of Angmar presses southward under the command of War-tyrant Akúlhun, it is here that the power of Angmar can be felt the strongest in the Ettenmoors. Cruel Akúlhun is prepared to sweep through the Ettenmoors and Trollshaws and raze Rivendell to the ground . . . if he can defy the Power that resides in the Hidden Valley. - [1]

The following services can be found in Gramsfoot:

Skills and traits can be bought for Commendations at the following NPCs.

Skills and traits can be slotted for a small price at the following NPCs.

Skills, traits and appearances can be bartered for

Sigils of Battle and

Greater Sigils of Battle at the following NPCs.

The following NPCs can bestow tribal Blessings upon monster player characters. Only one blessing can be active at a time.

Skills and traits can be bartered for

Mithril Coins at the following NPCs.

A Morgul flag that takes monsters to Dâr Dugoth in the Sundering of Osgiliath. [12.1S, 20.9W] 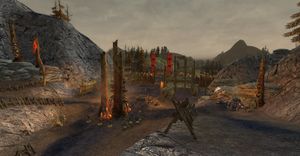