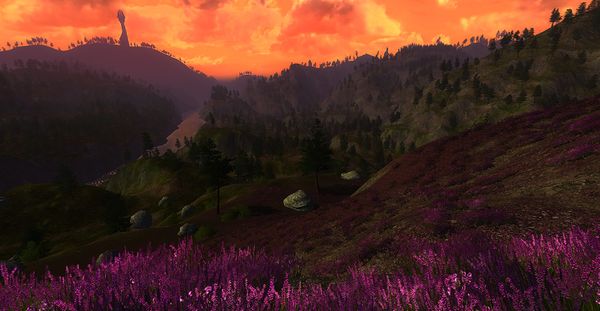 Gap of Rohan is a region found within the land of Eriador.

The Gap of Rohan is the great gap on the west of Rohan between the southern end of the Misty Mountains and the northernmost peaks of the White Mountains, once known as Gap of Calenardhon.

Through the Gap flow the rivers Isen and Adorn, which formed the effective western boundary of the region Calenardhon, later the Kingdom of Rohan.

This is not Rohan proper, but rather the Gap of Rohan, which covers the strip of territory between the Misty Mountains (to the north), the Kingdom of Rohan (to the east), and the White Mountains to the southeast. Mountains make rivers, and the lush valley farmland in the triangle formed by the Isen (flowing from the Misty Mountains) and the Adorn (originating in the White Mountains) is a historical point of contention between the Dunlendings and the Kingdom of Rohan.

The Rohirrim fought a number of battles against the Dunlendings and the Orcs of Saruman in the gap, during one of which Théodred, son of Théoden King, was mortally wounded.

Locations found within the region of Gap of Rohan are listed below. 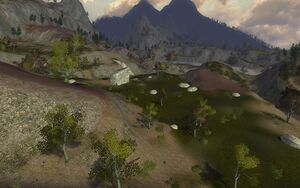 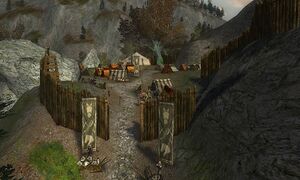 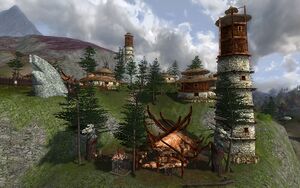 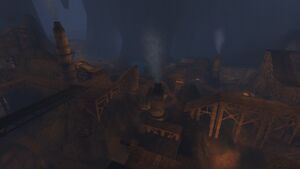 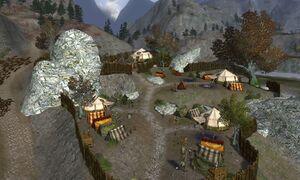 The River Isen flowed from the Wizard's Vale south into the Gap of Rohan and then curved westward to the Sea. The river could be crossed at the Fords of Isen in the Gap.

The Gap of Rohan was an important route for travellers between northern and southern Middle-earth. The Great West Road and the North-South Road together formed the Royal Road which had been built to enable travel between Gondor and Arnor. The Great West Road from Gondor through Rohan ran to the eastern bank of the Fords of Isen, and from the western bank continued the North-South Road to Eriador.

This road ran through the Gap, crossing the Isen at the Fords of Isen. A road branched north to Isengard long the west side of the Isen, just west of the Ford.

The Gap of Rohan was about 20 miles wide which represented a vulnerable point in the western defenses of Rohan and Gondor. Access to the Gap was controlled by the fortress of Angrenost, or Isengard, which in the later Third Age was controlled by Saruman, and by Helm's Deep.

The two kingdoms were founded in 3320 of the Second Age. Isengard was built shortly thereafter to guard against an attack on Gondor through the Gap from the west. Aglarond - later known as Helm's Deep - was built in the Third Age during the reign of the Ship-kings (830-1149).

Gondor gave Calenardhon to the Rohirrim in 2510. Isengard remained nominally under Gondor's control, though the guard there decreased and the stronghold was left in the care of a local family who were partly of Dunlendish descent. Dunlendings migrated through the Gap into the Westfold of Rohan.

The Men of Dunland were driven back through the Gap during the reigns of the first three Kings of Rohan. The Dunlendings grew to hate the Rohirrim and posed a continual threat on Rohan's western border. In 2710, Dunlendings took over Isengard and began raiding the Westfold. King Deor of Rohan defeated the raiders but was unable to dislodge them from Isengard.

In 2758, the Dunlendings led by Wulf launched an invasion through the Gap of Rohan. Many Rohirrim were killed trying to defend the Fords of Isen. King Helm and the survivors were besieged in the stronghold that afterwards became known as Helm's Deep during the Long Winter of 2758-59. Wulf was defeated by Frealaf in the spring of 2759 and the Dunlendings were again driven back through the Gap.

That same year, Saruman was given permission to live at Isengard by the Steward of Gondor in hopes that his presence would help protect against another invasion through the Gap of Rohan. But Saruman became corrupted with a desire for power and he made an alliance with the Dunlendings against the Rohirrim.

Saruman meanwhile had closed the Gap of Rohan to the Rohirrim. In early 3019, the Battles of the Fords of Isen were fought between Saruman's forces and the Rohirrim at the river crossing in the Gap. In the First Battle on February 25, King Theoden's son and heir Theodred was killed. He was buried on the island in the middle of the Fords. In the Second Battle on March 2, Saruman's army overwhelmed the Rohirrim guarding the Fords and proceeded to Helm's Deep where they in turn were defeated on the night of March 3-4.

After the War of the Ring, Isengard returned to the control of Gondor. The Men of Dunland vowed never to wage war on Rohan again. And the North-South Road to the newly reestablished North-kingdom of Arnor was reopened and travellers passed freely through the Gap of Rohan once more. 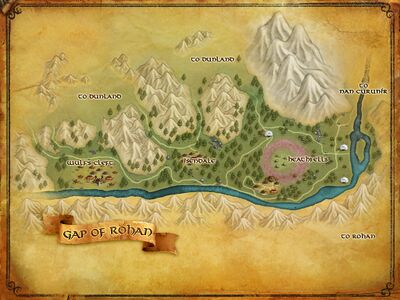 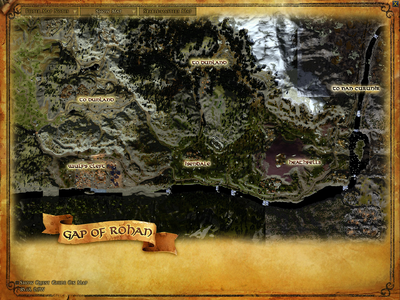 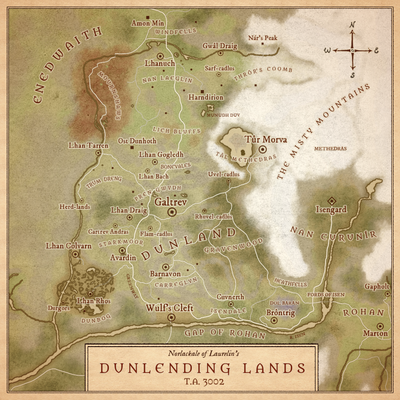 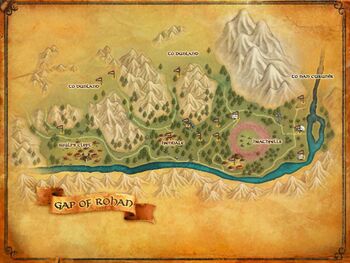 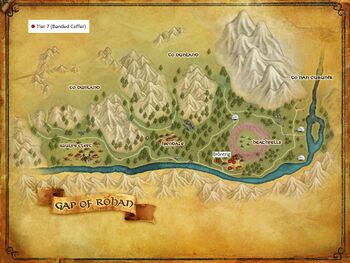