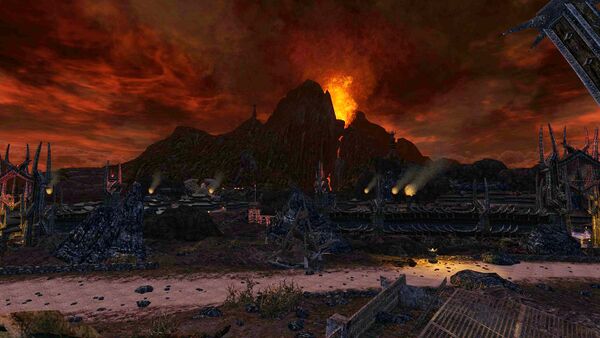 This walled town served as an encampment for the Men who served in Sauron's army. Since his downfall, the Easterlings and Haradrim remain here under the rule of their commanders, and have fallen to infighting. Fushaum Bal is divided by a deep gorge through which runs a river of lava that flows from Orodruin to the north-east. Now the north and south halves of the town are locked in conflict, the inhabitants of each seeking to wrest control of the entire town.

Fushaum Bal North is inhabited by Khundolar Easterlings under the command of Khirgi, the Hunter. Their faction seeks to gain control of all Fushaum Bal so that they may retake Fushaum Tûm from Thorakó, the Hewer.

Frodo Baggins and Samwise Gamgee could see Fushaum Bal out on the plain when they climbed the Morgai.[1]