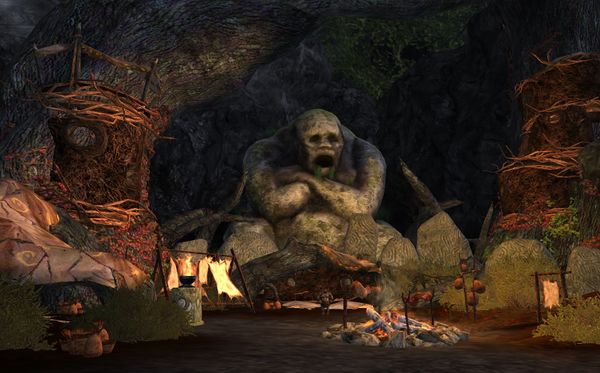 Bhol Rûdh is a landmark within Agarnaith in the Plateau of Gorgoroth. [52.1S, 32.8E]

The entrance to Bhol Rûdh is just to the east of Seregost. [52.1S, 32.8E]
The pass to the village of the Red Sky Clan is guarded by several Púkel-men statues on each side. 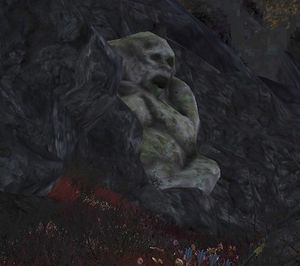 Separated by an unreachable mountain pass for many years, the Red Sky Clan enjoyed peacefulness and solitude. Until Mount Doom erupted, causing a landslide, and once again opening the Red Sky Clan to the lands of Gorgoroth.

'Long ago, Red Sky Clan live peacefully with Alashi and Easterlings in Mesha Omûr, the Living Wood. The Chaydash was as pure as glittery jewels.
Then, the gods fought. Their great battle caused earthquakes. The mountains rose and the valley became Batakh Inâ, the Stinging Bog. Soon, Red Sky Clan can no longer reach the valley, trapped by mountains.
We live out our lives peacefully in Bhol Rûdh. The Great Eye cannot reach us here.
Burning Mountain erupts again. The way to the valley is again opened, but it has become infested with evil and plague.