Battle of the Way of Smiths

This page is about the skirmish. For the deed, see The Battle of the Way of Smiths. 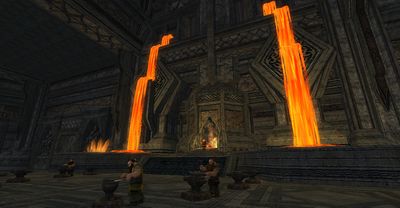 Battle of the Way of Smiths, is a level 55-140 skirmish that takes place is a cave passage the Way of Smiths which bridges the caverns between the Redhorn Lode and the Silverdeep in Moria. Within lies the famed forge of the dwarves known as the Heart of Fire. Skirmishes, can be started by using the Instance Finder, (as long as you're not in an instance already).

The Way of Smiths, in which lies the secret entrance to the Heart of Fire, must be defended from the Ghâsh-hai loyal to Mazog.

Battle of the Way of Smiths Mobs

Fight waves of assaults while trying to keep Stóthkell alive. There are 3 places to defend against assaults.

Located at the various defense points are bonus scrolls that can be used during the fights:

Simple boss fight against Harna during the final assault. Remember to loot the corpse before leaving.

Remember to loot the boss corpse before leaving. Competing the skirmish will reward Iron Garrison Miners Reputation. Rewards and Loot scale to the level, group size, and tier of the Skirmish. Loot is found by/at/in/from: