Battle of the Twenty-first Hall 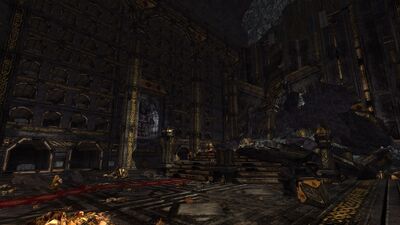 You have travelled to the Twenty-first Hall to aid in its defence. Follow Wíli's direction and help the Dwarves of Moria make their stand!

Battle of the Twenty-first Hall Mobs

Fight waves of assaults while trying to keep Wíli alive. There are 3 places to defend against assaults, each with a dwarf defender and a barricade.

After Wíli has relocated to the Chamber of Mazarbul:

You can pick up scrolls in the middle and plant them as a banner near the barricades. These banners provide a special buff for your fellowship:

Remember to loot the boss corpse before leaving. Competing the skirmish will reward Iron Garrison Guards Reputation. Rewards and Loot scale to the level, group size, and tier of the Skirmish. Loot is found by/at/in/from: