The Wallet is a feature of the User Interface (UI) to store and organize various forms of in-game Currencies. These may be in the form of "Coin," "Points" or "Things for Barter."

The Wallet holds currencies for all characters across the account on a particular server. It does not allow the sharing or transfer of items between servers.

Items held in the Wallet are displayed in a certain colour:

The Wallet, like most UI items, may be opened a number of different ways:

Contents of the Wallet 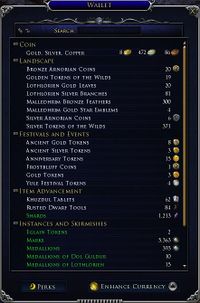 The top half of a typical Wallet 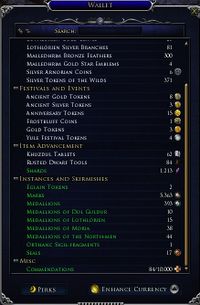 The bottom half of a typical Wallet

The contents of your wallet are constantly changing with each Update, hence the following list may be incomplete. The "Crafting" items are the output of Crafted Relics recipes for T6 (Supreme) through T9 (Westemnet)

History of the "Wallet"

With the November 2010 update (Free-to-Play -- F2P), in response to player demands, Turbine implemented a new (revised) Barter Wallet. Usually just referred to as the "Wallet."

This has been revised (expanded) with every release since its introduction.

If you are having trouble locating your various reward items, please check your Barter Wallet, they will no longer take up space in your character's inventory (Bags, Vault or Shared Storage).

With Update 5, all the various Skirmish rewards were consolidated into Marks, Medallions or Seals, and now called "Currency," and all stored in the Wallet.

The following turned into Marks:

The following turned into Medallions:

Note that items stored in your vault are not move to the wallet, until they are withdrawn to your inventory.

The LOTRO store offeres the Premium Wallet Upgrade, which allows most barter items to be stored in the wallet.

"Free up more space for crafting, looting, treasure, and more! This upgrade is account wide and will apply to all existing characters and future characters you create. It will allow you to carry more barter items, tokens, and currencies in your wallet, rather than in your bank or inventory. This includes instance and skirmish tokens, region barter tokens, festival tokens, taxidermy barter items, legendary item barter tokens, crafting instance tokens and crafted runic barter items."

The Barter Wallet holds all Marks, Medallions and Seals used to purchase items from the Skirmish Barter Vendors, and others as well as all Anniversary Tokens.

Commendations are a per-server, account shared currency in Monster Play.

The release of Update 10 will introduce a new in-game currency called Mithril Coins . They can be purchased in the LOTRO store with LOTRO Points and can be used for a variety of services including Stablemasters, Fast Travel to NPCs in quests, Reviving, Mannequins, and Daily Quest resets.

Motes of Enchantment now has a currency cap of 10,000, and now automatically goes into the Barter Wallet. Players who currently have more Motes than the cap will be unable to Disenchant items until they lower their Motes of Enchantment below the cap.

Festivity Tokens were added are automatically added into the Barter Wallet when acquired.

Tarnished Sigil's of Gondor now go into the Barter Wallet.

Coins of the Bugan now go into the Barter Wallet.

The Premium Wallet is now available to all characters for free.