From Lotro-Wiki.com
(Redirected from Jazargund)
Jump to navigation Jump to search 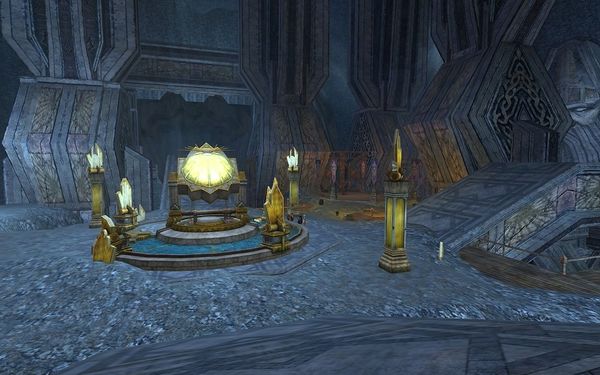 Located in the eastern region of Durin's Way this hall serves this part of Moria. This dwarf contingent is well stocked with supplies, provisions and can provide healing.

The following services can be found within the settlement of Jazârgund:

The ceremonial chamber of Jazârgund has seen so many rites and pronouncements throughout the ages of Moria that many dwarves claim that Durin's voice is engraved into the very stone from which it is hewn, and can be heard echoing through the vaulted space when all else lies silent. Now one of the dwarven expedition groups has set up an encampment within the chamber, thus hoping to gain control of the eastern halls of Durin's Way, and the clamour of their preparations is ever-present.

The circular, expansive Stone Hall is a hub for accessing several other sections of Durin's Way. It is located in the north-central section, in an area known to the dwarves as Jazârgund. A sturdy dwarf named Brogur leads the forces here. He believes the curse that holds Moria in its evil grip is nearing an end, and more dwarf warriors will come to reclaim the ancient halls. Brogur came to Moria with his cousin Bósi, who doubts that the malevolence lurking in their ancestral home is diminishing, and fears perhaps darker evils are at work in the ancient mine. Brogur and his lieutenants have devised hit-and-run tactics to strike at the leaders of the White Hands. He hopes that success will throw the Orcs into disarray so dwarf troops from the east can finish off the vile creatures. [1] 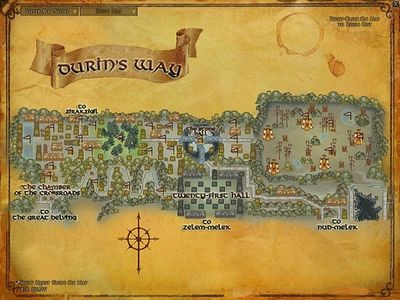