This page is about the Lore location. For quests and NPCs, see The Black Pool. 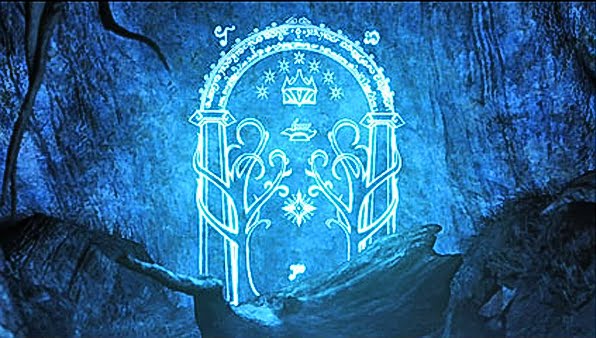 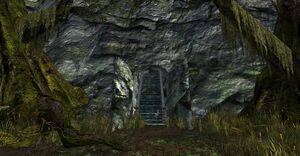 The Hollin Gate also known as the Doors of Durin or the West-gate is the entrance to Moria from the Walls of Moria in Eregion, just east of the Black Pool. The gate opens into Durin's Threshold in the Great Delving of Moria.

Since the early days of Middle-earth, the greatest kingdom of the dwarves lay beneath the Misty Mountains in the halls called Khazad-dûm. In those days, when there was trade between the dwarves and the Elves of both Eregion and Lothlórien, a vital trade route ran through Khazad-dûm from the West-gate (also called the Hollin Gate) to the Great Gate in Nanduhirion in the east.

The Hollin Gate was special. It was built by the smith Narvi and set with runes and symbols by Celebrimbor, the Elven jewel-smith who also forged the Elf-rings Narya, Nenya, and Vilya. He wrought the signs out of ithildin, a metal that reflects only the light of the moon and stars. When the moon did not shine, the Gate remained hidden and undetectable to any who looked upon it. Celebrimbor’s runes spelled out a riddle, and the doors would only open to a friend who spoke the answer:

"The Doors of Durin, Lord of Moria. Speak, friend, and enter. I, Narvi, made them. Celebrimbor of Hollin drew these signs."

The Sindarin inscription stated the password that would cause the Doors to swing open. [1] 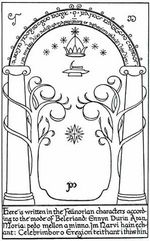 The Doors of Durin by J.R.R. Tolkien (as printed in The Fellowship of the Ring [1]

The Doors of Durin were a marker of the great friendship between the dwarves of Khazad-dûm and the Gwaith-i-Mírdain, the Elves of Eregion. The doors were engraved with symbols of both peoples: a hammer and anvil and a crown with seven stars for Narvi and Durin's Folk and the tree of the High Elves and rayed star of the house of Fëanor for Celebrimbor and his folk. The dwarves aided the Jewel-smiths as they could during the War of the Elves and Sauron, and in so doing Durin IV allowed many of the elves to escape north, where they founded the refuge of Imladris, but the Doors of Durin were shut then, hidden from both friend and foe.