Epic Battle: Hammer of the Underworld

From Lotro-Wiki.com
(Redirected from Hammer of the Underworld)
Jump to navigation Jump to search 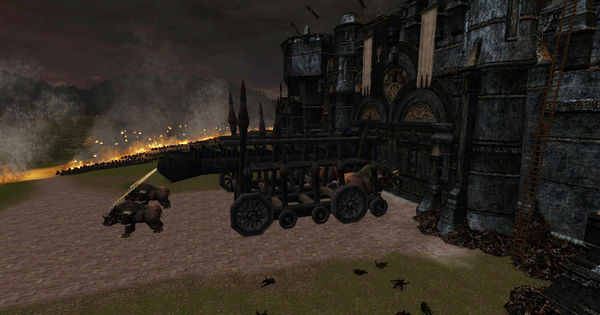 Hammer of the Underworld is an Epic Battle introduced in Update 17.

This is a scaled instance, designed for solo/duo or fellowship (6 players) from level 10 and higher. All players are scaled to level 100.
It is available in the Instance Finder and the Road to Battle panel if you have completed the Defence of Minas Tirith Epic Battle.
Estimated completion time is between 30-45 minutes.

Quests can only be completed once per day and can be run solo/duo or in a fellowship [100] Epic Battle: Hammer of the Underworld

Hammer of the Underworld Mobs

Quests can only be completed once per day and can be run Solo, Duo or in a Fellowship [100] Epic Battle: Hammer of the Underworld

Hammer of the Underworld is a defensive battle in three stages. Like Defence of Minas Tirith, the battle does not begin immediately upon entering; rather, it begins once a player speaks with Mithrandir and clicks the button to continue, or automatically after a few minutes.

Layout of the Battle

The battle is divided up into three areas: the northern gate-wall, the southern gate-wall, and the central gate-wall. (This is also the order in which the battle proceeds.) The northern and southern flanks are similar to each other: both areas have three Captains, four Spiked Barricades, and an assortment of supplies and armaments that must be defended. The central area has two Captains commanding Swan-knights [59.0N, 16.5W], as well as two Medium Catapults on the towers immediately flanking the area.

In the lull before the battle begins, players can prepare by setting captains to two-handed stance and/or upgrading the two catapults.

Stage I: The Northern Gate-wall

The battle always begins with Mithrandir and Imrahil defending the northern flank of the gate-wall [59.8N, 16.6W]. Groups of enemies will spawn in the field and begin grappling up the wall. In the fellowship version, two enemy catapults will also spawn, and must be destroyed using the northern Medium Catapult [59.5N, 16.5W] before they start causing mass damage to the defenders.

After a while, once the enemies have been whittled down a bit, the first side quest will pop. This will either be Epic Foe: Ughâsh the Unslakable [59.8N, 17.0W] or Drums of War. Shortly afterwards, an enemy Siege-tower will roll up to the wall and begin periodically spawning waves of mobs. It is generally safe to focus on the side quest first before coming back for the Siege-tower. Siege-tower mechanics are identical to Defence of Minas Tirith: three grapnel hooks need to be destroyed, then three powder casks on the Siege-tower need to be ignited to destroy the tower.

During the battle, keep an eye on health bars of the four Spiked Barricades, as certain mobs will attempt to pound at them. Repair them as necessary. Otherwise, keep soldiers healthy and wait for the incoming enemies to eventually subside.

Once the enemy waves have been exhausted on the north side, Mithrandir and Imrahil will move to the south side [58.6N, 16.7W]. For all intents and purposes, this stage is identical to the previous stage. Solo/duo players should note that one enemy catapult will also spawn for them; fellowships will get two as before. They can be destroyed with the southern Medium Catapult [58.9N, 16.5W].

After a while, the second side quest will pop, selected randomly from Epic Foe: Mâsorgh, Cleaver of Heads [58.9N, 16.5W], A Brutal Reversal, or Up from the Depths (fellowship only). A second Siege-tower will assail this segment of the wall. Focus on completing the side quest, then destroy the Siege-tower, and proceed as usual.

When Stage II ends, Imrahil shouts that Grond has been sighted, and the battle moves to the centre. Grond will now become a visible and examinable object in the Pelennor fields as it approaches the gate. However, despite Imrahil's orders, Grond cannot be damaged by the wall's Medium Catapults.

In solo/duo mode, one enemy catapult will spawn in range of the southern Medium Catapult; in fellowship mode, four enemy catapults will spawn, two for each Medium Catapult. Enemy waves are also in range of the catapults now, although for maximum merit it is wise to avoid defeating them too fast lest the battle end before completing side objectives. Note that the defending Swan-knights are significantly hardier than other types of allied soldiers in Epic Battles; they stand virtually no chance of being defeated, and so are generally safe to ignore.

The third and final side quest will pop once enough damage has been done to the enemy waves. This will be either Broken by Fear [59.4N, 16.8W] or On Black Wings. Additionally, two more Siege-towers will assault the wall, one at the northern gate-wall and the other at the southern gate-wall. Unlike the previous Siege-towers, the arrival of these towers is not announced by Imrahil. As long as catapults have not been overused to thin the enemy ranks, there should be ample time to complete the side quest and destroy both Siege-towers.

When enemy waves finally run dry, Mithrandir, Imrahil, and several other heroes run down the stairs into the central courtyard. Shortly afterwards, players will be teleported there as well. A cutscene shows Grond breaking through the gate, and the battle ends.

The defenders of Minas Tirith have thrown off the first assault by the forces of Mordor, but Mithrandir has predicted their next move: If they cannot master the wall, they will try and break through the Great Gate. For this purpose, the war-forges of Mordor have produced a vile tool of destruction, intimidating as it slowly crawls toward the White City: Grond, the Hammer of the Underworld, named after the dreadful war-hammer wielded by the Black Foe, Morgoth, himself, in ancient times long ago. As Grond makes its way to the gates, the defenders must fight off the ongoing assault on the walls near the gate and attempt to stop or destroy the Wolf's Head ram before it reaches the City and start hammering against its very entrance...