The creature Gollum earned his name because of the horrible noises he makes in his throat. Gandalf the Grey speculated that he belonged to a race of river-folk akin to the hobbits, which once dwelt east of the Misty Mountains in the Vales of Anduin. Gollum's tale is a sad and perilous one.

Sméagol, as was his name of old, went fishing on his birthday with his friend Déagol, who was suddenly pulled into the river by a fish. There, Déagol found a shiny gold ring in the silt at the river-bottom. Sméagol demanded the ring as a birthday present, but Déagol refused to relinquish it. Overcome by the power of the Ring – for this was the One Ring of the Dark Lord Sauron – Sméagol murdered his friend and claimed the Ring for himself. Banished by his people, he fled to a cave in the Misty Mountains, where the Ring’s power twisted his body and mind even as it prolonged his life for centuries.

Hundreds of years later, Gollum lost the Ring – or rather the Ring chose to be lost again – just in time for the hobbit Bilbo Baggins to stumble upon it. After a lengthy riddle-game in which Gollum tried to cheat his way to an easy meal – namely Bilbo – the hobbit escaped from the cave with the Ring’s aid, leaving the frustrated Gollum to stew in his own wrath until he at last gained the courage to leave the Misty Mountains in search of his birthday present. Since then he has endured many torments, including captivity at the hands of the Ranger Aragorn and the Elves of Mirkwood, and also torture in Mordor at the whim of Sauron. Still he endures, driven by a ceaseless yearning to regain the Ring... his "precious."[1]

A Sneaking Creature those informed may recognize as Gollum terrorizes the fisherman Garbert and his wife Afanen, who live in a cottage on the river Bruinen, in Tâl Bruinen, in the Trollshaws. The creature has been attempting to abduct their infant son Whelan.

Gollum follows the Fellowship of the Ring as they pass through Moria. Forced to cross the Anduin by the vigilance of the Galadhrim, he finds himself surrounded by Orcs in the Scuttledells of Mirkwood. The Malledhrim endeavour to recapture him, or at least keep he from falling into the hands of the Enemy.

"No! Let usss be!"
"Save me nice <race>ses! The orcs will pinch and burn poor preciousss!"
"The <race> helps us my precious! But is it strong enough?"
"Yesss! Die nassty orc! Leave poor Gollum alone!"
"We are free my precious! Run before the <race> grabs us! Everyone wants to catch poor Gollum! Gollum..."

During Anniversary Celebrations, Gollum can be found in Thinglad, sneaking after the Fellowship of the Ring as they travel down the Great River.

Gollum (March of the King)

The "gangrel-creature" that Frodo calls Sméagol appears in a story told by the Ranger Anborn in North Ithilien.

An illusory manifestation of Sméagol also appears to himself as a representation of the conflict between his loyalty to Frodo and his lust for the Ring. This manifestation appears several times as Gollum leads the hobbits up the pass of Cirith Ungol, in the Morgul Vale. [61.5S, 3.7E]

The real Sméagol is not dissuaded by these doubts, and comes to Shelob in her lair to offer her the hobbits as a meal.

Gollum's point of view can be witnessed in two Session Plays, one started by Mithrandir at the Camp of the Host as he worries about the hobbits taking the pass of Cirith Ungol; [40.8S, 10.3W] and the other started by Frodo Baggins at Cormallen as he confesses the final moments of the Quest of the Ring. [47.8S, 12.1W] 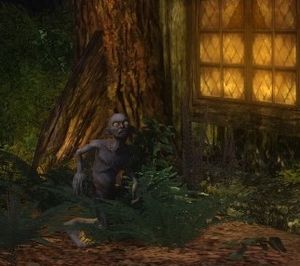 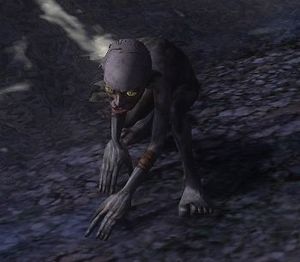 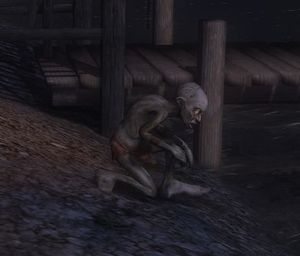