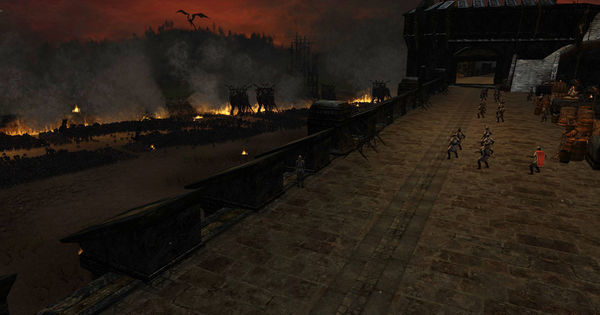 The Defence of Minas Tirith is an Epic Battle introduced in Update 17.

This is a scaled instance, designed for solo/duo or small fellowship (3 players) from level 10 and higher. All players are scaled to level 100.
It is available in the Instance Finder and the Road to Battle panel.
Estimated completion time is between 30-45 minutes.

Quests can only be completed once per day and can be run solo/duo or in a small fellowship [100] Epic Battle: Defence of Minas Tirith

Possible side objectives for the Defence of Minas Tirith.

The Defence of Minas Tirith Mobs

The instance wont progress until you talk with Mithrandir [60.8N, 17.8W], or after five minutes from the time you enter, whichever comes first. Gandalf is standing near you as you enter the instance. After a short discussion follow him up the wall and help defend the wall. Waves of orcs will breach the wall and every so often a siege tower will roll up that you must destroy. Avoid removing grappling hooks or ladders, as this has been rumoured to increase the chance that the instance will freeze partway through and force you to reset. To destroy the siege towers, first destroy the 3 anchor hooks that tether the tower to the outwalls. Next climb aboard the tower and set 3 charges, quickly climbing off.

Side quests will occur every so often. Several of the side quests will take you off the wall and help civilians or soldiers at the ground level, put out fires, clean up the dead or kill infiltrators. A couple side quests involve epic enemies on the wall.

Much of this is excerpted from an excellent guide by Dadi, of Arkenstone (https://dadislotroguides.com/big-battles-defence-of-minas-tirith-123-man/) and from a Reddit post by LordZorthan (https://www.reddit.com/r/lotro/comments/7j6skv/how_tough_is_defense_of_minas_tirith_solo/). Kudos to you two! All the editor did was combine, reorganize, and paraphrase. Brankoz (talk)

Note these walkthroughs are primarily focused on solo battles except as noted. Duo and 3-man teams should not have a hard time identifying when and how to split up activities.

Each Siege-tower is wheeled up to the wall by the enemies below. Once it “docks” to the wall there will be 3 Tower Grapnels that you must target and “kill.” Once these are down one person runs on to the Siege-tower (there is a plank) and ignite 3 Powder Kegs. Once lit, run off the Siege-tower.

Once off the siege tower, repair spiked barricades and heal soldiers (in that order), either via the Captain or with your own healing skills, then head back up to the catapult to prepare for the second wave.

Requirements for platinum in Defence of Minas Tirith are:

– 8 Siege equipment and barricades in tact

After crushing the Gondorian forces at Osgiliath, the Morgul-host advances quickly across the Pelennor Fields, making for the capital of Gondor - Minas Tirith, the White City, and the seat of power of steward Denethor. Siege machines have been constructed in the ruins of Osgiliath, and Orcs, Haradrim and Easterlings alike now march towards the black outer walls of the great stronghold of Men, under the command of the Black Commander of Mordor - the Witch-king of Angmar. The Nazgûl fly above on their fell steeds and seek to strike terror into the hearts of the defenders, for fear is one of the Enemy's greatest weapons.

But hope is all but lost in Minas Tirith. Previously to the fall of Osgiliath, reinforcements from the southern fiefdoms arrived in the city, lead by Imrahil of Dol Amroth and the lords of the South, amongst them Forlong the Fat of Lossarnach, Duinhir of Blackroot Vale, Golasgil of Anfalas, and Hirluin the Fair of Pinnath Gelin. The White Rider, Mithrandir, rallies the defenders and inspires them to stay strong against the dark tide of Mordor, keeping their spirits high. Aid has also been requested from the Rohirrim, who will surely ride to their allies aid.

Now the enemy assaults the walls, and the soldiers of Gondor must prepare to stand fast and hold their ground, if the White City is to last the night that now darkens the skies above Pelennor Fields...