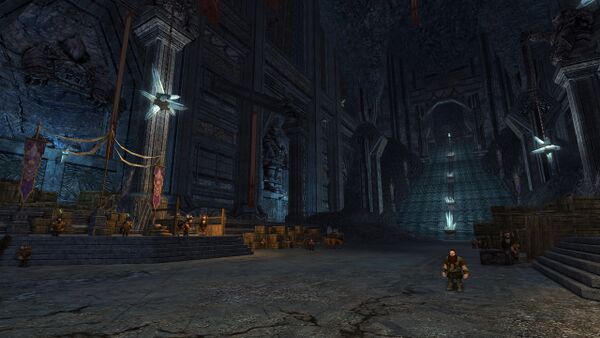 This is the first place a traveler sees when entering Moria from the west.

Click here for step by step directions for traveling to and from Durin's Threshhold.

The following deeds can be started/advanced by visiting this place:

The threshold of the western gate of Khazad-dûm, it was here that Durin completed his legendary journey through the heart of the mountains and came once again into the light of the sun, having discovered the place that would become the home of his peoples for ages to come.

Here, at Durin’s Threshold, the westernmost edge of Moria, the new colonists of Khazad-dûm store supplies brought in from Eregion and bound for outposts deep within the Dwarf-city. Here, at the foot of the grand stairs, where new stables have been raised and old forges have been lit, great new sagas begin beneath the mountains.

In this space between the Walls of Moria and the Goblin-held caverns beyond, Dwarves labor to revitalize their ancient home by unpacking their gear, exploring the darkest regions, patrolling the nearer ones, and stoking the fires of their hostel furnaces. A Stable-master waits to greet newcomers. Weary yet eager Dwarves seek out brave souls and strong arms to share the burdens of exploration and defense in these early new days beneath the mountain. Here, at least, haggard adventurers from Eriador can take a breath before braving the many perils to come.

Durin’s Threshold is comprised of three halls, with the grand entryway in the center and wings of furnaces to the north and south. Each is handsomely crafted in the manner of the Dwarves but modest compared to many of the older halls beyond. The masons of Moria designed these halls to whet a visitor’s appetite before he feasts on the visions within.

Once these halls received or prepared travelers. In those days, the wings to the north and south bulged with the tents and stalls of craftspeople and vendors gathered at the feet of the furnaces’ chimneys. Today, the northern wing is lit by furnace-flames again, and Dwarves toil smiling and cheering, “The sound of hammers once again rings in the halls of Moria!” But the southern wing remains dark and cold, cobwebbed and forlorn, even so close to the West-gate.

In a way, this place tells the tale of Moria in miniature. To the south and north lay sorrow and hope, ruin and repair, and between them the stables and provisions of the Dwarf expedition stand in little pools of light. Signs of victory and defeat alike show everywhere. [1]