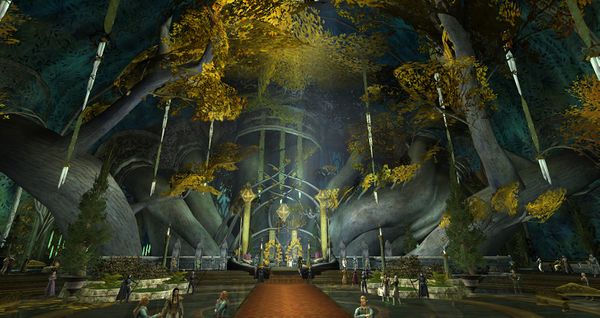 The Court of Celeborn is one of the four Allegiance Halls and is the main stage for the Court of Lothlórien quest chain. The leaders of the Realms of Lothlórien, Imladris and Mirkwood have gathered here to discuss what is to be done with the lingering threat of Dol Guldur.

In contrast to the Hall of the King and Erebor, the Court of Celeborn is not part of the contiguous maps of Middle-earth, meaning you cannot walk or ride there from other locations in the game world. It is initially only accessible via "instance travel" --

The Court of Lothlórien

"At a great height above the ground he came to a wide talan, like the deck of a great ship. On it was built a house, so large that almost it would have served for a hall of Men upon the earth. He entered behind Haldir, and found that he was in a chamber of oval shape, in the midst of which grew the trunk of the great mallorn, now tapering towards its crown, and yet making still a pillar of wide girth.
The chamber was filled with a soft light; its walls were green and silver and its roof of gold. Many elves were seated there. On two chairs beneath the bole of the tree and canopied by a living bough there sat, side by side, Celeborn and Galadriel." - The Fellowship of the Ring, Chapter 7.

The Elven Kingdom of Lothlórien

Lothlórien, translated as "Lórien of the Blossom" and usually called just Lórien, are the fabled golden woods whose Elves dwell high in the mallorn-trees and are ruled by Celeborn, wisest of the Eldar of Middle-earth, and the Lady Galadriel. The Golden Wood, is a blaze of light and colour at the edge of the Black Pit of Moria. Even in this time of shadow and fear, Celeborn, Galadriel, and their Silvan people keep it safe.

While Gondor faced the armies of Mordor, the western lands of Elves faced trials of their own. Now that the War is ended, many preparations are underway. Swear your allegiance to Galadriel and Celeborn in Lothlórien, and you will aid the causes of the Elves these, in Rivendell, and beyond.

The Court of Lothlórien

Note: while there are expert crafters present, there are no crafting facilities available.