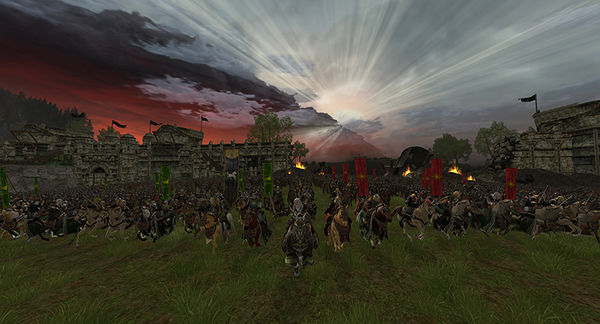 The Battle of Pelennor Fields is the greatest battle of the age Third Age. It takes place on the Pelennor Fields, directly outside the city of Minas Tirith. After the fall of Osgiliath, Sauron's forces have moved west to besiege the city, and the arrival of the Riders of Rohan has turned the siege into a pitched battle.

After you have completed all stages of the Battle of Pelennor Fields, you will have access to Minas Tirith (After-battle).

Working your way through the battle stages there are opportunities to complete the World Instances in order to continue the Wrath and Ruin quest chain, but they are not required to complete Epic book 6:

The Threshold of the City has several Quartermaster (Pelennor Battle Rewards Vendor)s these are related to the four World Instance in the The Battle of Pelennor Instances and will not provide rewards for completing the five areas.