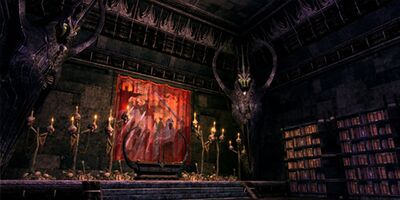 "Barad Guldur is the chief tower of Dol Guldur. From here, the Necromancer once viewed Greenwood the Great. Now the Lieutenant of Dol Guldur forays from this perch in search of the Company of the Ring..."

The name of this instance is Sindarin for "Tower of Dark Sorcery". The nearest summoning camp is at Helethir.

The following creatures are found within this instance:

After fighting the initial Armour sets and engaging the next set of mobs you will trigger the gauntlet. This means that enemies will be repeatably spawning in front and behind you as you move up the stairs. This means that you have to move through the trash groups quickly so you won't be overwhelmed. Also make sure that you have your off-tank watching the backside of your group so he can aggro anything that comes behind your group. Keep moving in a circular motion up the tower. If anyone dies you will most likely have to leave them for now, otherwise you have a higher chance of getting overwhelmed. once you get to the top with another pair of Armour sets you can stop and heal up, quickly. Once you defeat the Armour sets the gauntlet ends. Enemies will stop spawning and you can send a healer down to rezz anyone that died. You now have 45 minutes to defeat Dúrchest before the gauntlet resets. This means that if you wipe after 45 min. you have to do it all over again.

Note that the above is a reasonable way to explain how tier 2 works. On tier 1 there are mostly just the initial adds unless you are very slow, and none spawn behind you. You should be able to move very quickly up the stairs killing things as you go.

Main tank will hold near the wall at the end of the red carpet. Off-Tank needs to be close to the boss as well. The Tank will receive a Debuff that slowly reduces his threat over time. All DPS needs to be aware of this and be careful on the ammount of DPS they are providing. Even a critical hit of 500 or less when the debuff is high will cause the boss to pull off of the tank(s) and most likley one-hit a non heavy armour classes. Tanks should work to trade aggro with each other to keep the boss on them. Periodically, and add will spawn, and the third off tank needs to hold it while it is burned down. DPS is then redirected back at the boss. If anyone dies during the fight, Dúrchest will gain a 200k Morale boost each time. Several deaths early on almost assuredly means a wipe. After the adds cease, 5 in all (10 with challenge, pull the lever to spawn one), the boss can be burned down and defeated.

Additional way to tank Dúrchest: When starting the fight have 2 heavies (not the tank) head in front of Dúrchest and get aggro. Wait till the aggro debuff on the gets to about 50% on them, then have the tank run in and get aggro on him. The maximum the debuff can reach is 210% over 3 players meaning that the 2 "decoys" will have -80% and the tank will have about -40%. Follow the same DPS and add procedures as above.

Add Types: Wargs- Mostly Stealthed, will pounce someone, stunning them and hitting for ~5k, if they walk into there aggro radius, therefore it is best to either send a heavy out as bait with SI on them, or attack it purposely. Most of the Wargs are attached to sorcerers.

Sorcerers- Dangerous. They have a CC immunity corruption that cycles on and off. They also call out eyes which drop puddles. Recommend Pulling Warg attached to them, and then having them CCed until all others are dead, then have everyone focus on him and nuke him all at once. Use long stuns or CJs to limit his attacks while you finish him off. If you are having difficulty keeping him CCed because of the corruption, CC the warg instead, but everyone needs to be quick to take out the sorceror. Anyone who gets an eye should run to the nearest wall that won't drop the puddle in the middle of a walkway.

Armor Sets- There exact skills are determined by what type of armor they are (Shadow, Flame, Lightning) and what weapon they are holding (Sword, Axe, Mace):

After you kill Dúrchest the elves move up. Killing him completes a quest that can be turned in by one of the elves. A bard and repair-vendor also come up stairs. The bard is on the 2nd floor and the repair-vendor and quest-giver is in Dúrchest's room. After you go through the portal you enter the 2nd leg of "trash" mobs. The important thing here is too have a hunter with Heightened Senses traited or an LM with improved Stealth Detection. This will allow the hunter (or LM) to track the invisible wargs that roam around. Coming Soon Twins Guide:

And you keep climbing after that. Guldur-lights will give you fear and send you running into mobs until you reach the top of the tower and go outside. Once outside you find 2 levers along the buttress ring and pull both, The Lieutenant of Dol Guldur's door will open and you can fight the last boss up the outside stairs at the top of the tower.

The Lieutenant of Dol Guldur