From Lotro-Wiki.com
(Redirected from Tirith Rhaw)
Jump to navigation Jump to search 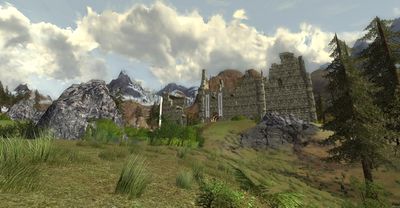 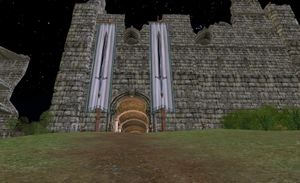 Tírith Rhaw (sindarin for "Wild-watch") is one of the five contested landmarks in the Ettenmoors. This ancient tower built by the Men of Rhudaur affords the Free Peoples a long view of the forest, and allows them to see down to the waterway. The westernmost keep located in the Coldfells and close to Glân Vraig and Ost Ringdyr, Tírith Rhaw is aligned with the Coldfells Army, but may at times fall into the hands of the Army of Angmar.

Atop a rise to the west of Ost Ringdyr, but not yet to the eastern bank of the Hoarwell, Tírith Rhaw’s silhouette is rising above the treeline, securing the slopes of the Coldfells. The tower has two entrances, one being the main gate facing west, while the other is a backdoor at the south-eastern corner. This backdoor can be used by anyone to exit Tírith Rhaw but only the side currently holding the keep can use the backdoor in the opposite direction.

Entering through the main gate, attackers will have to fight their way through a large hall and up the spiral stairs to the second floor. Directly above the gate, the keep's current commander makes his stand. Another set of stairs leads up to the final room, where the quest NPCs and the backdoor are located. If the oil and iron gathering quests have been turned in ten times, an iron cauldron will be installed above the western entrance which does damage to all foes entering the keep here.

Outside the keep, there are a number of rock formations. The most senior of these is a collection of rocks (3 acting as steps to the biggest one) on the road from the keep to Glan Vraig. The largest of these rocks is known as Nidor's Rock. On this rock is a spider (built as part of the landscape, you cannot target it) with two hatchlings beside. This is a memorial, added with the Helm's Deep Expansion, to a well-loved and greatly experience Spider Weaver from Brandywine called Nidor, who tragically passed away from cancer.

Tírith Rhaw to the side in control of the tower.. This effect grants +20% Infamy/Glory and Commendation gain.

Tírith Rhaw will house NPCs and quests associated with the side currently holding the fortress. All quest givers can be defeated by the opposing side, thus making their respective quests unavailable until they respawn.