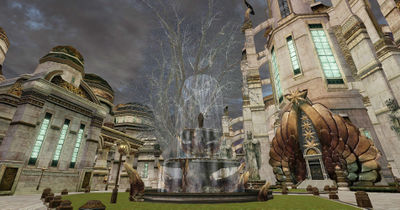 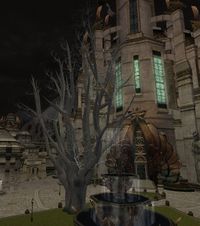 The White Tree stands in the center of the Citadel, the Seventh Tier of the White City, a landmark within Minas Tirith in Old Anórien. [65.6S, 19.1W]
It is the symbol of Gondor, and the motif represented upon Gondor's flag and armour.

The White Tree died in T.A. 2852 along with the Steward Belechthor II. No sapling was found to replace it, and so the Dead Tree was left standing. It remains here until Gandalf and Aragorn find a sapling on the Mountain and re-plant it in the Citadel after Aragorn has been crowned King in T.A. 3019. The new Tree can be seen in the Court of the Fountain at Misdummer.

The White Tree is a symbol along with the Seven Stars, which appears on the Livery of Gondor. With the coming of Aragorn upon the black ships, and the unfurling of his banner at the Battle of Pelennor Fields, the crown of Gondor is used again as part of this livery.

The White Tree in LOTRO was modeled after Professor Tolkien's favorite tree in the Oxford Botanical Gardens, now cut down.[1]