From Lotro-Wiki.com
(Redirected from The Hornburg)
Jump to navigation Jump to search 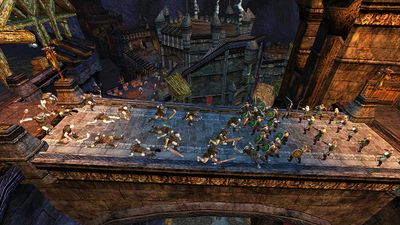 The Hornburg is an Epic Battle for Helm's Deep. All previous Epic Battles must be completed on Solo/Duo before you can access this battle.

This is a scaled instance, designed for solo, duo from level 10 and up.
It is available in the Instance Finder and the Road to Battle panel.
Estimated completion time is between 30-45 minutes.

Quests can only be completed once per day and can be run Solo or Duo [100] Epic Battle: The Hornburg

Possible side objectives for The Hornburg.

The battleground this time around is akin to that of a simpler version of the Deeping Wall without the aid of rock drops. Instead, you are given a slightly damaged Medium Catapult. Fortunately, you will not have to worry about any enemy siege weapons, but rather keeping your allies in good shape. A good strategy to try is to switch everyone into Two-handed stance and prioritize Sappers. Though you can tend to multiple Soldiers at once, keeping the banners up is slightly more challenging.

The Medium Catapults require three cranks before it can fire, significantly limiting its use once the enemy reaches the wall; try to time your shots to hit the front line of the advancing army before they move out of range. Slowing powder can keep them in place if available.
Note: Because progress is measured by waves of enemies being defeated, taking down too many ladders/grappling hooks will put the instance into an unwinnable state.

First Assault The enemy will march towards the wall, meaning this will be your opportunity to order the Commanders and use the catapult. Prepare for the side objectives Bring Down the Siege Ladders and Repair the Portcullis.

Second Wave The second wave will not differ much from the first. Keep an eye on the banners and be prepared for the side objectives, Protecting the Gatehouse, Winches in the Windows, and The Final Blockade

The Hornburg, originally known as Súthburg, is a castle within Helm's Deep built by the people of Gondor to defend Aglarond. The Rohirrim would later occupy the castle, with their leader Helm Hammerhand sounding a great horn atop the castle before going out to battle his Dunlending enemies. The castle was attached to the north end of the Deeping Wall and was at the end of a road which ran to Helm's Dike.[1][2][3][4][5]