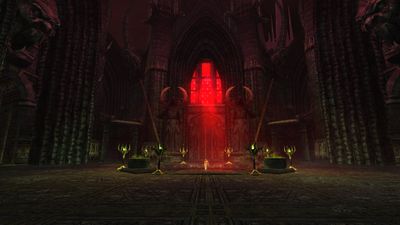 "Deep in the heart of Seregost, Lhaereth the Stained prepares to unleash a second Great Plague upon the realms of Men. Any hope of thwarting her lies on the intrepid few, led by rangers Rhadrog and Faeron, who have gained entry to her doorless keep."

This page is about the instance the Court of Seregost. For the landmark, see Seregost.

First boss: Gorkasak, Captain of the Guard and Kulgrú, Mistress of the Household

Third boss: Lhaereth the Stained and her Plague Cauldrons

This instance is located in the interior of the keep of Seregost, featuring tight corridors and medium-sized rooms of mobs. Besides trash mobs, three of Lhaereth's lieutenants guard the way to the spire, where Lhaereth waits to unleash her new plague cauldrons upon the forces of Gondor. The players will be accompanied by Rhadrog and Faeron, although they do not do any fighting until the final encounter with Lhaereth.

Phase One: The Morroval Twins

The first trash pull consists of three Superior Uruk Guards, two on either side of the entry corridor and one patrolling further down. These Uruk guards have the ability to call nearby enemies to aid them in their defence. Past them, the first boss zone immediately presents itself, with lots of trash mobs that need to be completely cleared out before the bosses will appear. The left-hand room consists of another three Uruk guards as well as four stealthed Morvul Shadows; the right-hand room houses one Uruk guard and many Black Númenóreans and Morroval Hostesses which may be range-pulled in groups.

This is a dual boss-fight against Gorkasak, Captain of the Guard and Kulgrú, Mistress of the Household.

As soon as all mobs in these two rooms are cleared out, the twin brother-sister pair will appear and say a few words; they will not attack until provoked, however. Gorkasak appears in the left-hand room while Kulgrú appears in the right-hand room behind the banister.

A central mechanic to this fight is the concept of each sibling's "home" room, which is the room the sibling spawns in. After the fight begins, while one remains in his/her home room, he/she will gain a stacking buff every 10 seconds (up to 10) which increases outgoing damage and decreases incoming damage. At maximum stacks, the sibling will absorb all damage. The buff takes 30 seconds to wear off once the sibling is taken out of his/her home room. Thus, at higher difficulties, it is imperative that both siblings are taken into the opposite rooms, either periodically or permanently.

Other things to note about this fight:

When the twins are down, their corresponding rewards chest spawns in the central chamber and the door to move further into the tower opens.

Shortly past the twins' domain, the corridor opens into a large atrium guarded by a host of Lhaereth's devoted. Seven merrevail, two of whom are stealthed, stalk the edges of the room. Six Black Númenóreans line the center, with an Uruk patrolling among them. Finally, four Uruks stand guard along the gates blocking off the throne at the end of the chamber. All of these mobs can be pulled in small groups with only enemies in a short vicinity. All of them must be defeated to activate the second boss encounter.

As Lhaereth retreats further into her spire, she calls Dulgabêth to her defence. After the events of Chapter 4 of the Black Book, Dulgabêth is now a shell of his former self, a vessel of poison barely holding together in his physical form.

He wields a large greatsword with unsurprisingly high melee damage, but also commands a variety of poison attacks. Notably, every 30 seconds or so, Dulgabêth will use a Bursting Boils attack, which hits all players in the group for extremely high tactical damage. At T2 115 it is necessary to have maxed tactical mitigation and possibly some extra morale essences slotted for lighter classes to even survive it. The attack also drops a poison cloud centred on each player which deals a moderate amount of damage over time, making survival even more difficult. Thankfully, the cloud DoT does not stack.

Besides the burst tactical damage, the fight is a basic tank-and-spank. When Dulgabêth finally falls, his chest appears below the throne, and two doors open behind the throne leading to the next part of the instance.

A cavernous hallway behind the throne introduces players to a new type of enemy that will play a much larger role from this point forward: Plagued Great Bats. These bats can inflict a heavy-damage, removable disease debuff with a melee attack, and drop a plague cloud identical to Dulgabêth's when they are defeated. The debuff can do upwards of 12,000 damage per tick, and if not removed will turn into an unremovable 2-minute debuff to primary stats. Four bats occupy this cavern, before the group reaches the doorway into the Plague Chambers.

This next chamber is rife with Goblin Assistants, with a couple of Uruk guards in the mix. It has apparently served as the testing chamber for Lhaereth's plague; the left-hand wall is interspersed with three jail cells holding goblins, orcs, and trolls undergoing varying grades of poisoning. These jail cells can be opened with levers and the enemies who are still alive within will attack.

Note that all of the mobs in this room can be bypassed by hugging the left wall all the way until the gate to Zhólug. The one goblin assistant who runs frantically around the room can be avoided as well if timed right.

At the far end of the Plague Chambers is a closed gate, guarded on the other side by a large troll. Zhólug, like Dulgabêth, also drops plague clouds periodically. Be aware that he always starts off the fight with a ranged stone-throw stun; whoever grabs aggro first should be prepared for that. Otherwise it is a simple fight.

Phase Four: The Spire of Seregost

Past Zhólug is the final spiral rampway leading up to Lhaereth. Plagued Great Bats come streaming down the tower in waves of three, the beginnings of a swarm that would carry plague across Middle-earth if not stopped. These bats have an extremely small aggro radius and do not need to be fought; players need only hug the outer wall of the tower to avoid engaging them. Either way, eventually the top chamber of the tower reveals itself, with Lhaereth inside and Faeron and Rhadrog awaiting the battle.

At the top of Seregost, Lhaereth's plan is ultimately revealed: four cauldrons of plague-ridden liquid, traces of which her bats will carry off the tower and into the realm of Men to complete her past, failed objective. The goal of the players is not to defeat Lhaereth, but rather to destroy all four of her Plague Cauldrons and thus prevent the plague from spreading.

Each cauldron has a morale bar and spawns morroval guards in retaliation upon being destroyed. Throughout the battle, Plagued Great Bats will slowly fly up each surviving cauldron, hover over it for some time (about 15 seconds) and then fly off, presumably with a full payload of plague. These bats should be aggroed off the cauldron ASAP by the tank, as allowing too many bats to escape will automatically fail the encounter.

Lhaereth herself will be engaged by Faeron and Rhadrog, freeing up the players to concentrate on the cauldrons. However, in a longer fight (e.g. Tier 2 Challenge mode), the two Rangers are not able to withstand her for long, and the tank will need to eventually aggro her and kite her around the room as well. Note also that she initially picks a random target close to her, which might be a player, but as long as the player does not build any threat against her, she will turn her attention to the Rangers as soon as they land a hit on her.

Without challenge mode, this is mechanically a simple fight: the tank will aggro and kite all mobs that spawn while the DPS destroys the cauldrons. Members of the group, and especially the tank, should watch for the bats' plague clouds and cleanse the poison debuffs as needed. Ideally, the four cauldrons should be destroyed at the same time (realistically, in quick succession) to minimize the impact of the spawning merrevail - most of them despawn immediately once all four cauldrons are destroyed. As soon as they are down, most of the mobs will despawn, Lhaereth's chest will appear, and Lhaereth will engage in her final speech before flying out, completing the instance.

For Tier 2 Challenge mode, the matron of the bats must be defeated to ensure that the plagued bats never again trouble Middle-earth. Khílnat is called in by Lhaereth once six Plagued Great-bats have been defeated. She notably employs a very long (30-second) stun on her target, which is easily deadly for a tanking class dragging many bats, merrevail, and potentially Lhaereth herself behind them, and should be universally broken out of.

As this challenge tends to draw out the fight, the tank absolutely needs to stay alert for stuns and poison debuffs, cleansing both as soon as possible. Furthermore, Lhaereth will usually need to be pulled off the Rangers to prevent her from defeating both, which places the tank in an extra layer of danger. Kiting all the mobs is virtually the only option here, ensuring that mobs land as few hits as possible. DPS should focus target on Khílnat as soon as the tank has stable aggro and defeat her as quickly as possible.

Once Khílnat is down, the procedure is the same as that on Tier 1, albeit with greater pressure to destroy the cauldrons quickly before the group is overwhelmed. When all four are down, two rewards chests will appear instead of one, and the challenge is complete!

The Court of Seregost Mobs

Item:Heavy Hauberk of Mordor's Bane Medium Armour, Might
Will Armour

In addition to loot from tier 1, these items have a chance of dropping from boss chests on tier 2.