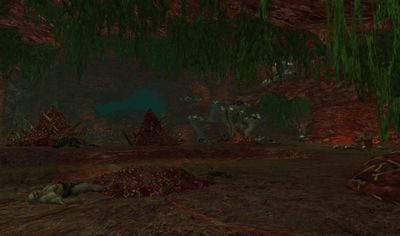 "Since the overthrow of Moria, the Orcs have disposed of their dead in the great chasm they call Skûmfil. Over the ages, the rotting pile of carcasses and filth that has accumulated there has also attracted many foul and disgusting creatures, from the vile Gredbyg, to the scavenging Kergrim . . ."

In the Black Pit of Moria, Skûmfil (Black Speech for Odour-cave), is the garbage dump at the bottom. Among the filth and corpses, a war rages between the beastly Kergrim and the hungry Gredbyg. Inside Skûmfil, two paths lead to a giant corpse-heap, the ultimate prize for the victors. Your route determines whether you will face the "King" or "Queen". Beneath it all lurks an even more sinister challenge.

The entrance can be found near a campsite in the Foundations of Stone at [13.2S, 100.4W]. Coming from the Shadowed Refuge, go west and take the first left after the spawn point. Follow the road down and go left at the crossroads. Go down and follow the road until you can jump down to your left into a small toxic green lake. Swim to the other side and follow the road left. This will lead you to the campsite and the instance entrance. 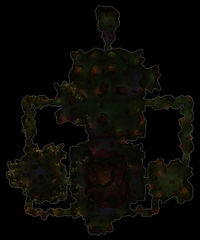 Skûmfil is a large circular cave with paths leading left and right from the entrance. A pit in the middle leads to Hwandrin's lair, but requires a 2-part key obtained from each side of Skûmfil and by completing the quest The Stinking Ward. Each path ends up at the far end of the cave, where either Grimreaver or Brúmbereth will be waiting. In the main room of the cave, bugs and beasts are at war. Breaking up a fight will cause a group to win, chosen at random, and attack.

Going left will lead to Bonetooth. Activating the encounter will seal the right-hand path. The left route continues to Old Gnawer and his Cave-claw pets Shalebiter and Rockjaw. Cracktooth can be summoned by a Minstrel on a class quest. Brúmbereth the Hive-queen will be waiting at the end, having defeated the Kergrim king thanks to your weakening of the Kergrim forces.

Going right will lead to Uammaethor. Activating the encounter will seal the left-hand path. Ulugon, Nestaduan, Grog, and Grothulun guard the way. Champions can summon Longpincer for their class quest. Going this way will give the Kergrim king, Grimreaver, the upper hand against the Queen, so you will face him at the top of the corpse-pile.

Entering the spider pit requires the Stinking Ward key obtained by defeating both Grimreaver and Brúmbereth in separate runs and completing the quest The Stinking Ward. The spiders in the pit respawn very quickly which make it hard to get to a safe spot to prep for the boss, but you can complete the Moria spider deed, the Moria Globsnaga deed and the Skumfil spider deed all at once so it's useful to stay at the door to kill them repeatedly. Hwandrin and her brood must be defeated to complete the challenge (and in former days for a chance at leggings).