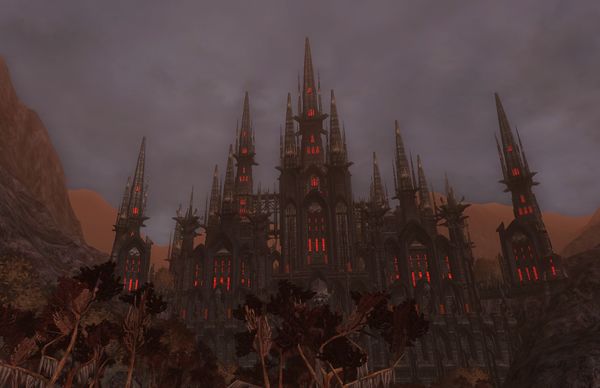 This page is about the landmark in Seregost. For the Instance, see The Court of Seregost.

Seregost (Sindarin for Blood-fort) is a point of interest within Agarnaith on the Plateau of Gorgoroth. [48.8S, 33.4E]

The headquarters of Lhaereth the Stained, the fortress of Seregost is found in the north-east of Agarnaith, straddling the river Chaydash. It divides Agarnaith proper from the Mokál Rukh, and is said to be accessible only by flight. The Conquest of Gorgoroth will have to find another way of bypassing its sheer western walls.

Seregost has weaknesses to exploit, however. Anyone clever and nimble enough might find a way to climb up, though it may seem impossible to those lacking in resourcefulness. The pair of Watching-stones on either side of the fortress share a mysterious bond and are no friends of Lhaereth. [48.3S, 34.2E] [49.0S, 32.9E] And anyone approaching Seregost from the east will find two entrances at ground level, each guarded only by a pair of Uruks. [48.1S, 34.0E] [48.6S, 34.2E]

The halls leading from these entrances have openings on either side, about halfway through, providing access to the Western and Eastern Courtyards and to the centre of the fortress. [48.4S, 33.4E] [48.9S, 33.7E] In the centre is a door to the Pits of Seregost, where Lhaereth's prisoners are kept. [48.6S, 33.7E] However, this is only accessible during The Secrets of Seregost. At the other end of these halls, opposite the entrances, are the Western and Eastern Terraces. [48.7S, 32.4E] [49.6S, 32.9E]

Stairs in each courtyard go to the upper level, where the Mokál Rukh Terrace looks out to the north-east [48.3S, 34.1E] and the Overlook Terrace looks over Agarnaith to the south-west. [49.0S, 32.9E] On the Overlook Terrace is the entry to the Court of Seregost, the chambers of Seregost's guests and leadership. [49.0S, 33.0E] This is the site of a World Instance which takes place after the events in the Pits.

During The Secrets of Seregost:

During The Return to Seregost:

The following creatures are found within this area:
Outside:

Lhaereth had long been loyal to Sauron even before he first came to Mordor, so he built for her Seregost, the Blood-fort, among the wooded Broken Vale. There she brewed her plagues which transformed the Broken Vale into the Bloody Gore.[1]

Sauron considered the Great Plague a failure, however, and gave Seregost to the Black Blade of Lebennin, as one of the Nine Keeps he granted to the Nazgûl.[2] Lhaereth later reclaimed the fort. Ayorzén claims that those taken to Seregost never leave, and that those subjected to her experiments are stripped of their identity.[3][4]