This page is about Osgiliath as it is before the Battle of Pelennor Fields. For events after that battle, see Osgiliath (After Battle). 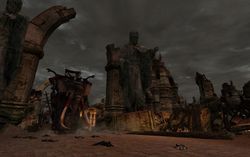 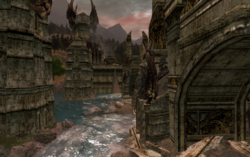 River Anduin flowing through the city 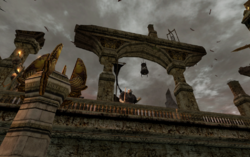 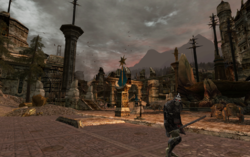 Located on the River Anduin between Minas Tirith and Minas Morgul, Osgiliath was the ancient capital of the Kingdom of Gondor. Depopulated during the Third Age, it gradually fell into ruin. During the War of the Ring, the abandoned city gained strategic importance as a crossing point over the Anduin, both for Men of Gondor and Orcs of Mordor.

The city's position and construction is unique. The eastern portion of the city lies on the solid bank of the foothills of the Ephel Dúath - the Mountains of Shadow - as they meet the river. The western portion of the city is built atop an outcropping of stone lying within the middle of the river. A raised roadway, called the Causeway, travels over the mud flats and swamp-like terrain of the river's western shore, to connect Osgiliath with Minas Tirith and other western destinations.

All instances are in Osgiliath and are accessed via the Osgiliath Culverts (Which must be entered from the East).

Completing Lost, But Not Forgotten unlocks the following dailies:

All NPCs are also found in the Osgiliath Culverts.

The grand city of Osgiliath, once Gondor’s capital, has seen many woes. Standing athwart the river Anduin, it is a shattered shell of its former glory, long forsaken and left in shambles. The Orcs of the Morgul Vale now teem in the city’s eastern half, under the command of the Lord of the Nazgûl. At last word, the defenders of Gondor still hold the western shores, but how long they can endure the Witch-king’s hosts is a question whose answer will likely prove grim.

The city was founded by Isildur and Anárion near the end of the Second Age. Ruling Gondor jointly, they used Osgiliath as their capital. It was defended by two smaller fortress cities, Minas Ithil (where Isildur lived) and Minas Anor (where Anárion lived). Osgiliath soon became a large and flourishing city.

At the heart of Osgiliath was a great stone bridge over the river. On the bridge was a tower containing the famous Dome of Stars, which housed the city's Palantír. Another important building (or possibly the same one) was the Great Hall, which initially served as a throne room for Isildur and Anárion.

For over a thousand years, Osgiliath remained the greatest city in Gondor, though from the 5th century of the Third Age, the kings, beginning with Ostoher, used Minas Anor as a summer residence.

Osgiliath was hit hard by the catastrophic civil war of the Kin-strife. In TA 1437, the city, then held by Eldacar, was besieged by Castamir's forces. During the fighting, fire broke out, and large parts of the city were destroyed, including the Dome of Stars. The Palantír housed in the Dome was lost in the river.

The decline of the city was greatly accelerated by the Great Plague of TA 1636. Many of its people died from the disease, while others fled to remote parts of the country, few of whom returned. Severely depopulated, Osgiliath began to fall into ruin. In 1640, Tarondor, whose predecessor Telemnar had died from the plague, moved the capital permanently to Minas Anor.

In TA 2000, Minas Ithil was besieged by the Nazgûl, who captured it two years later. Osgiliath, by this time mostly ruined and deserted, became a no man's land between its two former fortresses, now called Minas Morgul and Minas Tirith.

The final blow came in TA 2475, when Uruks of Mordor overran Ithilien and captured Osgiliath. Though they were thrown back by Boromir, son of then-Steward Denethor I, Osgiliath was finally ruined and completely abandoned, and its great bridge was broken. [1] 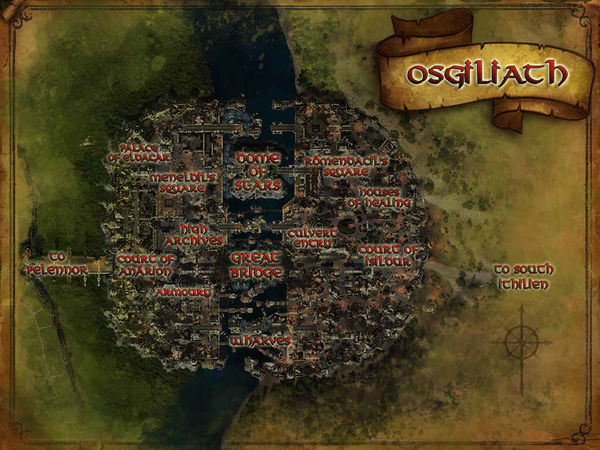