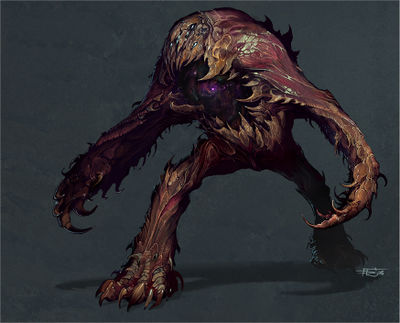 Nameless (Narbugud in Black Speech, Binakhrâm in Khuzdul) are a species of Ancient Evil.

The term Nameless encompasses many ancient and terrible creatures found in the remote places of Middle-earth. Some are known to be spirits who served Morgoth in the First Age and escaped his downfall. However, Nameless usually refers specifically to the creatures of unknown origin native to the deepest, darkest regions of the world, particularly the lowest depths of Moria.

'Far, far below the deepest delving of the Dwarves, the world is gnawed by nameless things. Even Sauron knows them not. They are older than he.'

If they are truly older than Sauron, beings of such evil nature are likely the result of the corruptions Morgoth wrought on the world when it was young. Some of these vaguely resemble the peoples of the surface world, only with hideous alterations. Others are more beast-like or unlike anything else in appearance. Certain other rare beings of ancient power that do not fit into any other category, such as fallen Wizards, are classified as Nameless for taxonomic purposes.

Locations where Nameless can be found include:

Nameless are always aggressive and of varying difficulty, most commonly Normal outside of Instances. They are vulnerable to Beleriand damage and sometimes Cries, and strongest against Common damage and Tactical damage. Nameless often deal Shadow damage with their attacks.

The category of Nameless is a diverse one, but some particular types can be discerned. Each of these have their own sets of abilities. Though their motives are often mysterious and many have no loyalty to Sauron, their malice cannot be denied, and they are considered Evil in alignment.

Belryg (sg. Balrog (Sindarin for Demon of Might)) are powerful demons of shadow and flame. They served Morgoth during the wars of the First Age, and those who survived the breaking of Thangorodrim are among the most powerful remnants of the first Dark Lord's forces. Only two of them are known to have survived to the present era: Thaurlach, who was imprisoned in the Rift of Nûrz Ghâshu, and Durin's Bane, who was dormant beneath Khazad-dûm until the dwarves accidentally woke it and were driven out.

Caeryg (sg. Caerog (Sindarin for Earth-demon)) are demons that appear to be made of stone. Their veins and mouths are usually fiery red but are sometimes other colours such as icy blue or brimstone yellow, depending on their environment. They are weaker than Belryg and vary considerably in power. The weakest are capable of being defeated by a single adventurer, and the greatest require a large group to defeat.

Caeryg sometimes knock their opponents back.

Darklings look like black slugs and are usually about as threatening as they look. However in some instances they can transform into or summon World-eaters and should be dealt with quickly. They can be found in the Rift of Nûrz Ghâshu and in the Foundations of Stone in Moria.

Darklings have an aura of Seeping Fear, and their attacks deal Shadow damage.

Elhudan (Dunlendish for Fiend-fire) are spirits that manifest as floating, fluctuating blobs of light. They look like Corpse-candles and are sometimes classified as that species, but other specimens are classified as Nameless.

Some clouds of Swamp Gas or Fungal Spores act as if they have an intelligence guiding them. These are also classified as Nameless and may be related to these amorphous spirits.

Elhudan often give off a Blinding Glare, impairing the vision of those nearby.

Faceless beings are vaguely Man-shaped only with hoofed, digitigrade legs and, as their moniker indicates, no face except for a mouth. Some have horns or bony armour plates. They are among the Nameless in the Foundations of Stone, where they are titled Overseers. Other Faceless have come out of the White Mountains to haunt Taur Drúadan. These are called Dheghûn by the Drúedain.

Faceless often have several abilities including Corruption effects that strengthen their defences or allow them to make special attacks. They can inflict a Shifting Poison that can inflict a variety of effects. Some of them have a set of auras, each one of which targets the weaknesses of one of the races of the Free Peoples.

Headless beings, also called Dark-maw, are similar to the Faceless except they have straight legs and no head at all. Instead, they have a gaping mouth of crooked, spiked teeth between their wide shoulders. They dwell in the Foundations of Stone.

The Headless share some of the same Corruptions as the Faceless.

Regmyl (singular: Rogmul) (Sindarin for Demon-slave) are demons of fire and shadow, similar to the Belryg but lesser in stature and often subservient to them. Some Regmyl are considered their own species, while others are classified as a subtype of Nameless.

World-eaters are among the greatest of the non-unique Nameless. They have two distinct appearances. One variety, found in both Nûrz Ghâshu and in Moria, has a distinct two-eyed head, a mouth of sharp teeth, rigid overlapping plates on the legs, and long claws and toes. They are brown or black in colouration. The other variety is found only in Moria and is even more alien-looking, with a mouth which occupies the entire centre of its body, and what appear to be several eyes placed irregularly in fissures in the mass of flesh or scales it has for a face. They are pink in colouration.

At least some World-eaters have a knockback attack.

The Silmarillion describes the Ainur, to which Sauron belongs, as existing before the physical universe and before time. However, those of the Ainur who entered the world did not all do so at the same time, so there is a possibility of beings physically existing longer than Sauron.[2] In his earlier writings, J.R.R. Tolkien envisioned there being hundreds of Belryg, but this number declined and Belryg became individually more powerful as he developed his stories. In what seem to be his final notes on the matter, written after the publication of The Lord of the Rings, he said there were at most seven Belryg.[3] The Silmarillion also tells of Gothmog, Lord of Belryg, who was slain by Ecthelion of the Fountain during the Fall of Gondolin. Glorfindel killed another Balrog to allow the survivors of Gondolin to escape.[4]

The developers sometimes summon multiple copies of Durin's Bane and Thaurlach during special events such as during the Anniversary Celebration and to celebrate major updates. These are always quite interesting encounters as Durin's Bane has an effect which instantly defeats all players in range after the first six players are defeated.

The Nameless remain a constant source of mystery for LOTRO. In recent years we have gotten references to the "Nameless Mother" called Throkhâr through the secret stones scavenger hunt as well as recent missions.