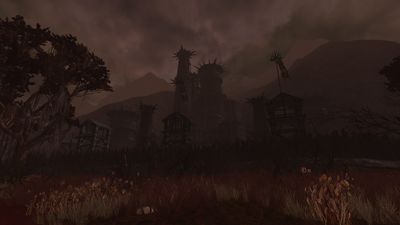 Kala-gijak (Black Speech for Blood Stronghold) is a point of interest within Agarnaith on the Plateau of Gorgoroth. [52.9S, 29.4E]

Built into the Mithram Spur on the southern side of the valley, this stronghold is the main base of the Uruk-hai of Agarnaith, and serves to guard Seregost which lies further into the Bloody Gore. It is well-defended, with a palisade surrounding an outer bailey containing many Uruk huts and occupied by many Uruks and several trolls. It has two entrances: the western entrance is connected by road to the rest of Gorgoroth, but the eastern entrance opens onto the trackless deeper swamp. The perimeter is also guarded by eight watchtowers, each manned by a Kala-gijak Lookout.

Within this less fortified area is a stone wall and a gate sealing off the inner bailey, in front of the keep. Only with the aid of the Red Sky Clan do the relatively few members of the Conquest of Gorgoroth in Agarnaith have any hope of breaching this inner wall. The keep itself remains inaccessible, but the captain, Brogmaush, will come forth to challenge any who approach the doors.

Kala-gijak is led by Brogmaush, but before Sauron's defeat it was captained by Mauznákh. After the Dark Lord's fall, Lhaereth the Stained came to demand Mauznákh's loyalty, but he refused, due to her not helping in the recent battles against Gondor. Brogmaush betrayed Mauznákh, usurping command of the stronghold and giving him to Lhaereth as a test subject.[1][2]