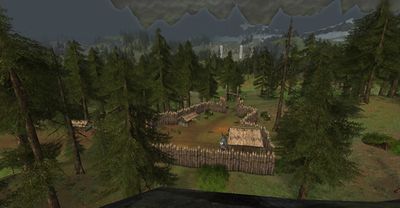 The Grimwood Lumber Camp is one of the five contested landmarks in the Ettenmoors. Once a harvesting location for the Hobbits of Hoarhallow, the Grimwood Lumber Camp now offers equipment for refining and preparing the wood needed to build palisades throughout the Ettenmoors. The trees on a small grove in the wild forest of Hithlad have been cut to make room for the lumber-yard. Both the Coldfells Army as well as the Army of Angmar seek to take permanend control of the Grimwood and its valuable resources.

A grove west of Hoarhallow, next to a wooded cliff in the central part of Hithlad. The Lumber-camp has two entrances, one to the north and one to the west. A strong wooden palisade fortifies the locale. The commander of the camp is standing under a parapet in the south-eastern corner. Most of the wood-chopping is done directly to the west of the camp where lumberjacks work hard to produce valuable wood resources for the side currently holding the lumber-yard.

Holding the Lumber-yard grants the effect

Grimwood Lumber Camp to the side in control of Grimwood. This effect grants +20% Infamy/Glory and Commendation gain.

The Grimwood Lumber Camp will house NPCs and quests associated with the side currently holding the fortress. All quest givers can be defeated by the opposing side, thus making their respective quests unavailable until they respawn.