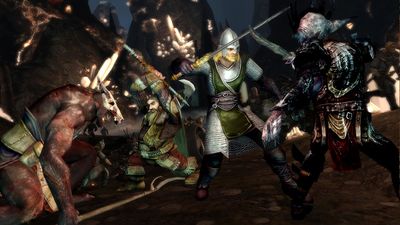 The Glittering Caves is an Epic Battle for Helm's Deep. This is the fourth battle you must complete in Solo/Duo mode before you can access the next Epic Battle.

This is a scaled instance, designed for solo, duo or small fellowship (3 players) from level 10 and up.
It is available in the Instance Finder and the Road to Battle panel.
Estimated completion time is between 30-45 minutes.

Quests can only be completed once per day and can be run Solo, Duo or in a Small Fellowship [100] Epic Battle: The Glittering Caves

Possible side objectives for The Glittering Caves.

First Wave This instance is arguably one of the more difficult to traverse due to the lack of a map and the terrain. Familiarize yourself with the routes and be prepared to backtrack in order to reach areas quickly. The first attack will begin on either the east (Gimli) or west (Gamling) side of the caves. Keep your Soldiers alive as much as possible and be prepared for the possible side objectives:
West Side side Objectives

East Side side Objectives

Second Wave The second attack will be on the opposite side of the caves, and the battle will go more or less the same as the west side. Once you are called to the center, the enemy will begin to march towards your location. If you wait too long to get to the centre defensive points, you will be instantly defeated by enemy archers.

Final Wave The last wave will march towards the center area of the caves. There will be more allied Soldiers per group but more enemies as well. Be prepared for the possible side objectives: Final side Objectives

Also known as Aglarond, the Glittering Caves is a series of jewelled caverns beneath the White Mountains behind Helm's Deep which served as a refuge for the Rohirrim women, children and elderly during the Battle of the Hornburg. Following the destruction of the Deeping Wall several Rohirrim including Éomer and Gimli were forced to retreat into the caves, defending it against Saruman's Orcs. When Gimli first entered the caves was taken by its beauty, and following the conclusion of the War of the Ring he established a Dwarf colony here and was crowned Lord of the Glittering Caves.[1][2][3][4][5]